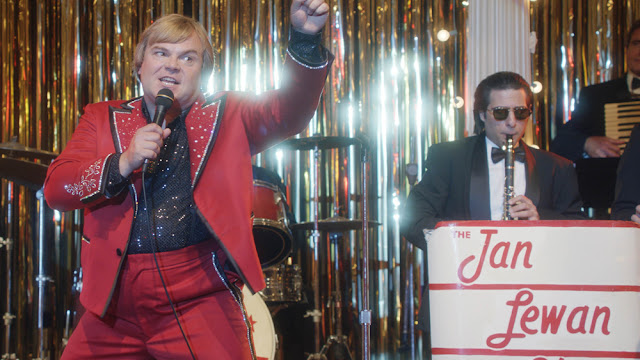 Netflix is really focusing on original content now days, their latest entry into their catalogue is a satirical take on a true story about Jan Lewan and the Ponzi scheme that made him The Polka King. Continue reading to see my full review of The Polka King. There are minor spoilers throughout.

Jan Lewan was a real person, and this story actually happened. This film was supposed to be a satirical take on what happened. But it was confused. The movie didn't know what it wanted to be. Sometimes it was satirical, sometimes it was sincere, sometimes it was straight up parody. Other times it felt farcical, like they were making fun of the true story, not trying to tell it. The Polka King needed to pick a lane and stay in it.

Weirdly, however, I was reminded of another Jack Black vehicle. Parts of this movie felt like it was an episode of Black Mirror or Twilight Zone based off of School of Rock. Both are down on their luck people played by Jack Black, who trick people to make their music dreams come true. I adore School of Rock. Jack Black is hit and miss for me, and he is an absolute delight in that. He does strong work here too, and while he was consistent, no one knew how they wanted to portray him or Jan's story. Black makes Jan utterly likeable in every scene, and even though he's doing dishonest things and scheming tons of people, you root for him in a weird way. That in and of itself, redeems the film ever so slightly.

J.B. Smoove has a role, but he is completely wasted. Smoove is one of the funniest people living on the planet right now. He can take any ordinary situation and make it absolutely hysterical. Just watch any episode of Curb Your Enthusiasm and it will prove my point. Here, he is in 3 or 4 scenes and plays it mostly straight. It is a shame, because when you have that much talent at your disposal, it should be used!

Jenny Slate plays Jan Lewan's wife, Maria. She adds a much needed layer to the story, and in some ways her story is more tragic than Jan's. They take their time with a subplot showing her evolution, and it actually plays quite well. Slate's portrayal of Maria enhances The Polka King and makes it a better film than it would be without her.

Jason Schwartzman and Willie Garson both have roles as members of Jan's band. They make a nice supporting cast, even though neither had much to do. Schwartzman, who always nails wacky characters, has much more to do as Mickey Pizzazz than Garson does.

The Polka King seems formulaic in some ways too. While they were telling a true story, it feels like a text book scripted one. Not completely their fault as they had to stay true to the real people being portrayed, but Jan's arc as a person is as plainly defined as any on-the-nose protagonist of an ordinary "journey movie".

If you are a fan of Jack Black and enjoy his comedies, you might be a bit disappointed. He plays Jan wonderfully, but it isn't knee slapping funny. There is an underlying sweetness to his character, but has a weirdness layer too. Plus there is a a lot of Polka music. The film spends an enormous amount of time showing Jack perform as Jan Lewan. Jack is very talented musically, but there is only so much polka music a person can take. I found my attention wane when one of the many scenes of him performing on stage happened.

I hadn't heard of Jan Lewan, or know his story before I saw The Polka King so in that sense, the movie did its job. There is one part of Maria's story I would have liked to more know about, and that is the whole beauty pageant thing. But other than that, it was enough.

If you like polka music, ponzi schemes, eccentric hairstyles and overall weirdness, give The Polka King a shot. The story might intrigue you.