What Happened to Monday - Review 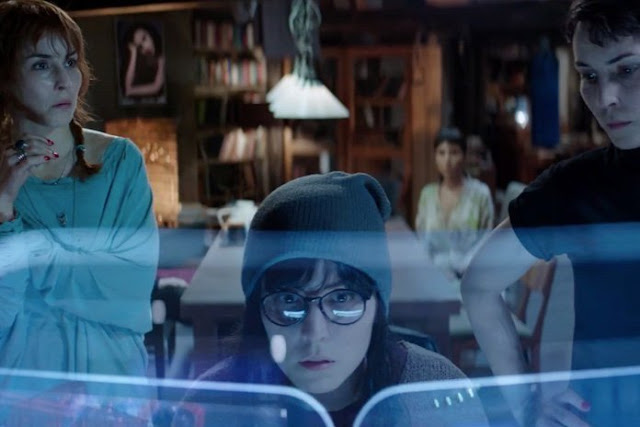 Netflix is on a role with original movies lately. Their most recent one is a sci-fi thriller starring Noomi Rapace as seven different siblings. I love that smaller movies that normally wouldn't get a big audience now have more outlets to be seen from. Continue reading to see how What Happened to Monday did as a tail-end summer movie.


To be blunt right up top, I wanted more. It was a middling movie. The film ran the fine line between good and great but fell more on the mere "good" side. It was missing that extra flavor to propel it into "great" territory. It certainly isn't a bad film. There have been much worse ones out this year. The cast was great, albeit most of them were wasted.


The story goes that in the future the world is so crowded that each family is only allowed one child. Any siblings that happen will be put into cryo-sleep and awoken when the population is back to a manageable amount. A woman has 7 kids, dies at child birth and her father (Willem Dafoe) decides to keep all of them a secret. They are named for each day of the week, and they are allowed to go out on that day, each retaining a singular identity. When Monday goes missing, secrets start to unravel and the movie goes on from there.

If the movie accomplished anything, it is that it proved we do not appreciate or use Noomi Rapace in movies as much as we should. She was incredible, giving all seven siblings distinct personalities. You might not remember which names are associated with which sister, but they are all distinct enough for you to remember their personalities.

Characters certainly outweighed plot, and while character development is important, an equal balance between both is best. While watching this I was baffled at first as to why they cast Willem Dafoe - quintessential bad guy (His last name literally has "foe" in it!) as the grandfather who would protect these girls. Then there is one scene that makes it perfectly clear. He does what he has to do to ensure the girls' survival. In the limited time he was in the movie, you get a full understanding of the tortured person he is, and how he lives with the decision he made to hide the girls every single day of his life. He was perfectly cast because a tough-love no-nonsense person was needed and Dafoe is brilliant at playing that.

The film dumps a bunch of exposition on you to set up the world as soon as the movie starts. It was certainly necessary and I'm glad they got it out of the way fast. It was sort of like the third paragraph of this review. After that, it takes its time to get to know the seven sisters (some more than others) and how their daily routine goes, implementing flashbacks to show how they were trained as children.

There a couple of twists and turns in the story, some more obvious than others. The resolution was satisfying, even if it sort of stumbled to the finish line. Again, this is a good movie. It just doesn't have that "wow" factor to make it a great one. Tommy Wirkola did a great job moving the camera around, and shooting one actor playing seven different roles is not an easy thing to do. He did it flawlessly. The world he envisioned is certainly a wonderful visual spectacle to see in HD. He directed Hansel & Gretel: Witch Hunters which had some visually impressive moments as well, so it was nice to see how he had evolved as a storyteller.

Overall it is a nice adventure to go on, and it certainly keeps you hooked. Since you're not paying anything extra for it if you already subscribe to Netflix, it is worth giving a shot. Even if you watch it just to see Noomi Rapace be seven different people, which is the highlight of the film, it is worth it. It is a bit sci-fi "fugitive on the run" thriller, a bit "post-apocalyptic future world" story and a bit "government controlling people's lives and the corruption that comes with it" movie. It even has a line straight out of Star Wars! If any of that intrigues you, give it a whirl.

What Happened to Monday is now streaming exclusively on Netflix.
﻿