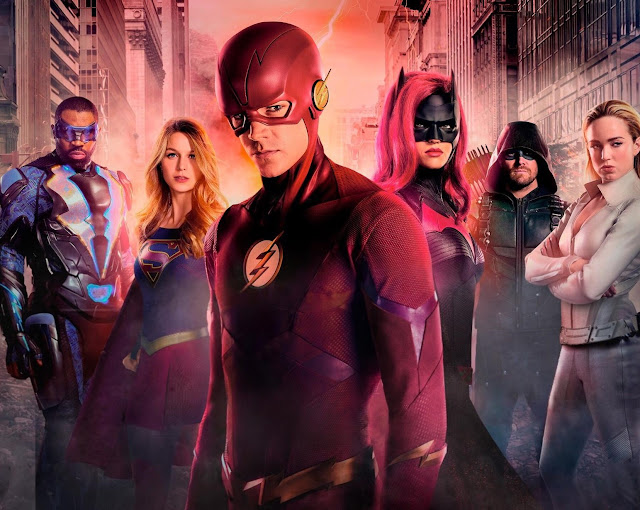 The Arrowverse is back for its biggest season yet! This week we saw 4 out of the 6 shows premiere, including newcomer Batwoman. There was lots of spectacle, intrigue, mythology and even a Crisis on Infinite Earths tease. 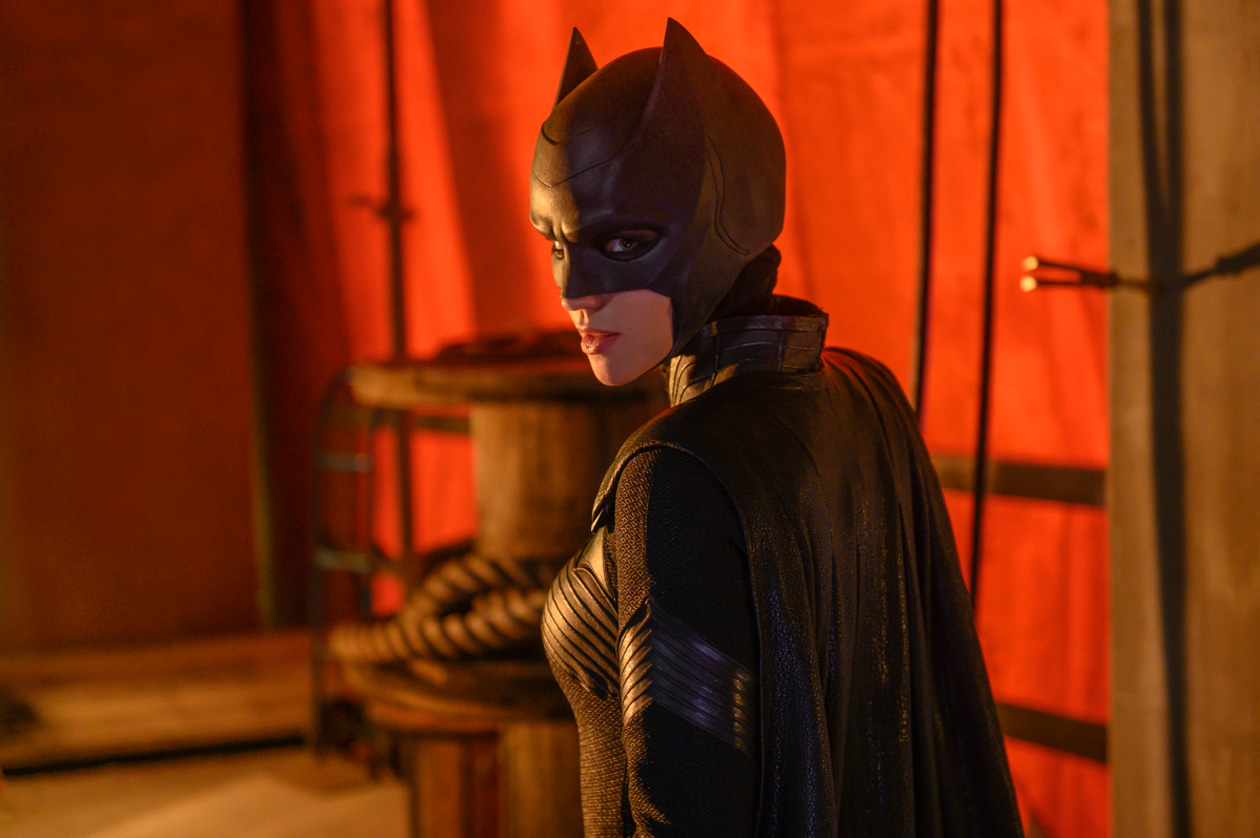 For a pilot, Batwoman did exactly what it was supposed to do. Sure it was a bit choppy and wooden at times. But this is the first page of the first chapter of a long book. We are seeing a pre-Elseworlds Kate Kane. It will take a while to get her to where she was in last year's crossover. This is the new street level vigilante replacement for Arrow. It has potential, even if it didn't show it.

The supporting cast didn't have much to do, but the seeds planted make it so they will. One particular highlight was that of Luke Fox, played by Camrus Johnson. If the show's journey takes him on a similar one to the comics, watching him become Batwing will be a lot of fun. The show also has Dougray Scott, who plays Kate's father and the new Commissioner of Gotham PD. The CW leans heavily in on relationships, so the one between Kate and her father will probably often be at the forefront.

The show is not shy about name dropping Batman or Bruce Wayne. They put it on front street. His disappearance, and familial relationship to Kate is the catalyst that makes her become Batwoman. They keep his disappearance vague, as if to keep the door open for a guest appearance.

It did feel a bit lackluster as a self contained thing, but when treated like the first chapter of a book, it gets the job done.

The episode felt rushed in places, like it should have been a 90 minute premiere. In other areas, it felt like it was dragging things out. It was weird that an episode felt too slow and rushed at the same time. The pacing was off, and it affected the episode. It is going to have to catch up quickly if it wants to be present day (post-Elseworlds) for the next crossover. That gives the show about 7 or 8 episodes to get there.

Overall, not the strongest start, but it has potential. Hopefully it won't be squandered.

You can read my full review of the episode over at The GWW. 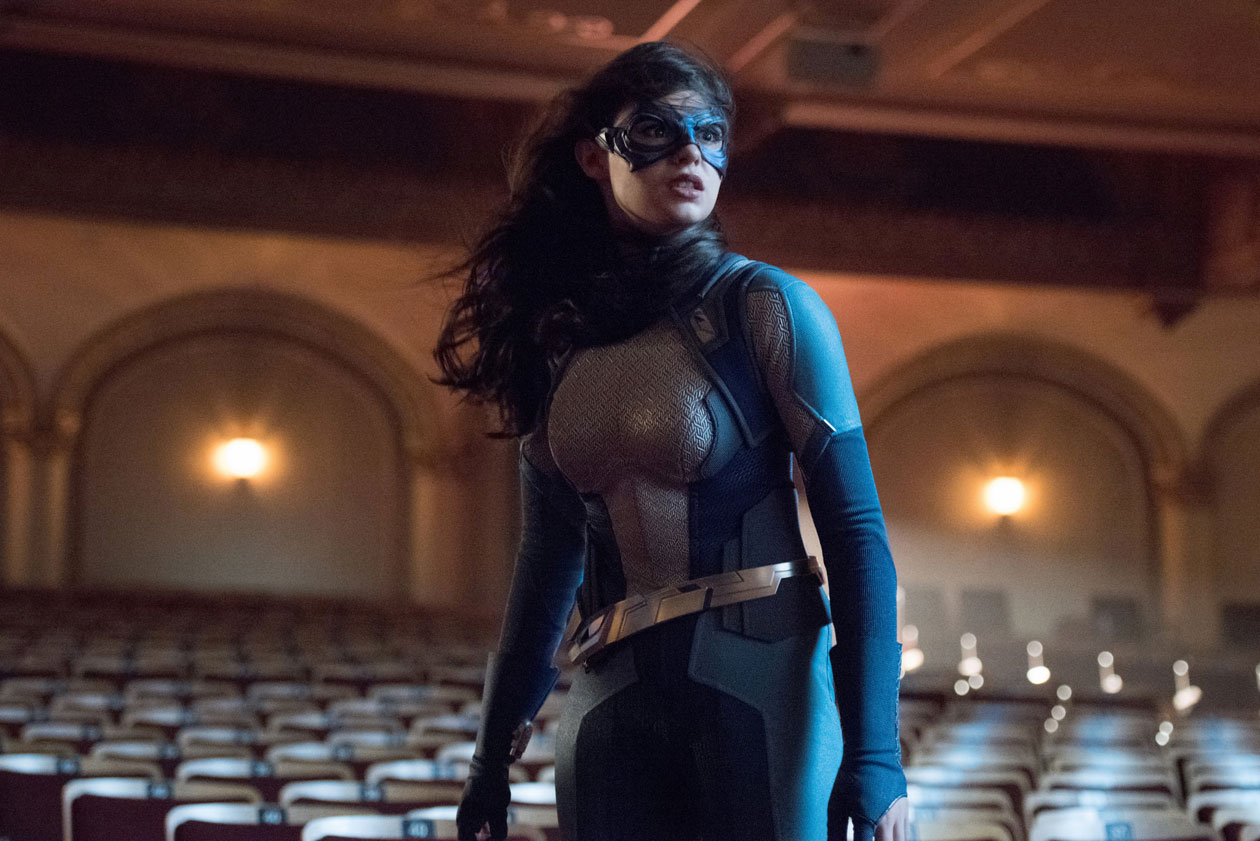 Every year it seems that Oliver Queen and Barry Allen get new suits. Kara has had the same one, until now. Her new suit comes with pants, and it is a massive upgrade from the previous one. Other than that little bit of housekeeping, the show hit the ground running big time.

CatCo is being turned into a TMZ type outlet, which compromises the integrity of James and Kara's reporting. Supergirl more than any other Arrowverse show (except perhaps Black Lightning) has reflected our real life issues. There is a war against the press right now, and the show is dealing with that in its own way.

Dual villains become more problematic than singular ones. But as Lena seems to be serving as one of the villains this year, it makes things a little different. That is going to be a very personal, psychological battle. The other, big alien villain is there because of J'onn, which is a nice change. If this show follows the same format as usual, Lena and J'onn's "brother" will team up, to make the team have a unified mission. But for now, they are two very separate stories. Every villain thinks they're not a villain, and Lena literally says "I am not a villain" in this. That is an actual line written by actual writers said by an actual actor that made the cut of the episode...

There is also a ton of new cast members joining this season. Kelly Olsen (Azie Tesfai), is here full time now, which makes sense given her importance to the team last year. There is also Andrea Rojas (Julie Gonzalo) who is in leagues with Lena, and looks to have a sinister agenda of her own.

Last year, Supergirl teased and planted things that didn't get payoff for a long time. Hopefully this time it will be better paced. But there is a lot to love, including Phil LaMarr as Manhunter's brother. LaMarr has played many DC characters in animated projects, including John Stewart, Flash, and Aquaman just to name a few. It's nice that they finally have a heft story for J'onn.

The premiere gave fans a lot to chew on, hopefully they all pan out in a satisfying way, just like Kara's new costume did.

Black Lightning - Episode 3.01 - "The Book Of Occupation - Chapter One: Birth Of Blackbird" 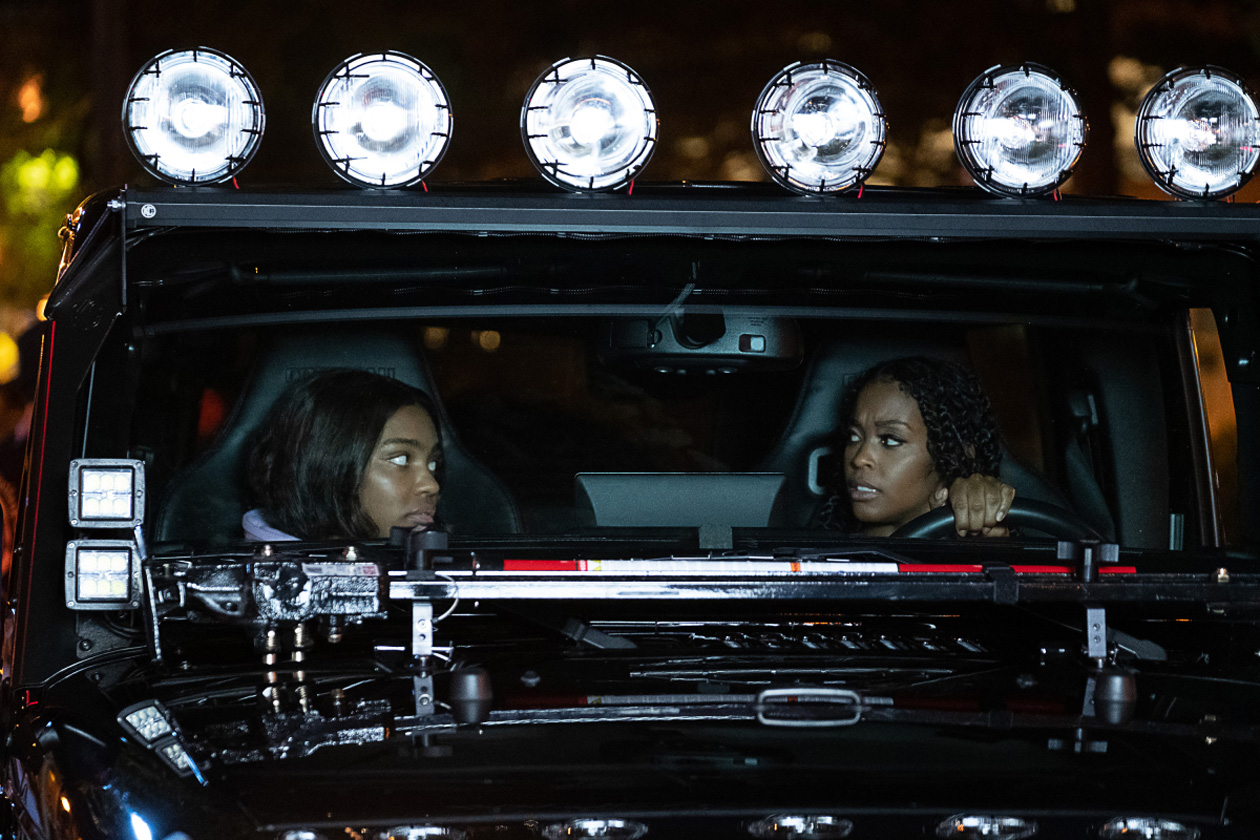 Black Lightning started fast and never let up. The episode was a new chapter, as the title notes, but still part of the same book. In other words, it doesn't serve as a very good jump on point for new viewers. The series is telling one giant story instead of a "villain of the week" serial, and the show is better for it.

From the pilot, it felt like the show would gradually shift to focus more on Jefferson's daughters, Anissa and Jen. That is exactly what is happening here. Anissa did the bulk of the heavy lifting. The focus is very much on them, as is par for the course for a CW show.

Things are dire. Jefferson and Tobias are locked up in the same place. It is under the ruse of "safety" but they are prisoners of Bill Duke's Agent Odell. His quiet yet powerful presence makes for a different villain than Tobias's dominating and intimidating presence.

The episode got things going very quickly. Not only did it catch the audience up to what has been happening since last season, but it launched the story into new and exciting directions for the future. The show has benefited from shorter seasons than its fellow Arrowverse counterparts, who always find a mid-season slump consisting of filler and questionable side stories. For the most part Black Lightning has been very streamlined, and the show is better for it.

Anissa locked out of Freeland will offer interesting story possibilities. The Pierce family is more disjointed than ever, and it seems like it will test them like never before.

The episode was jam packed, laying out many seeds for the future. Everything from Tobias, to Grace, to the briefcase, to Agent Odell's true intentions. It was unexpected to have Black Lightning be the strongest episode of the week thus far, but here are.

It is great to know that Jefferson will appear in Crisis On Infinite Earths, it will be interesting to see if that bleeds into their so far self contained story, or will it be something separate.

Overall, this was a great premiere, it feels like audiences are in for a treat this season. 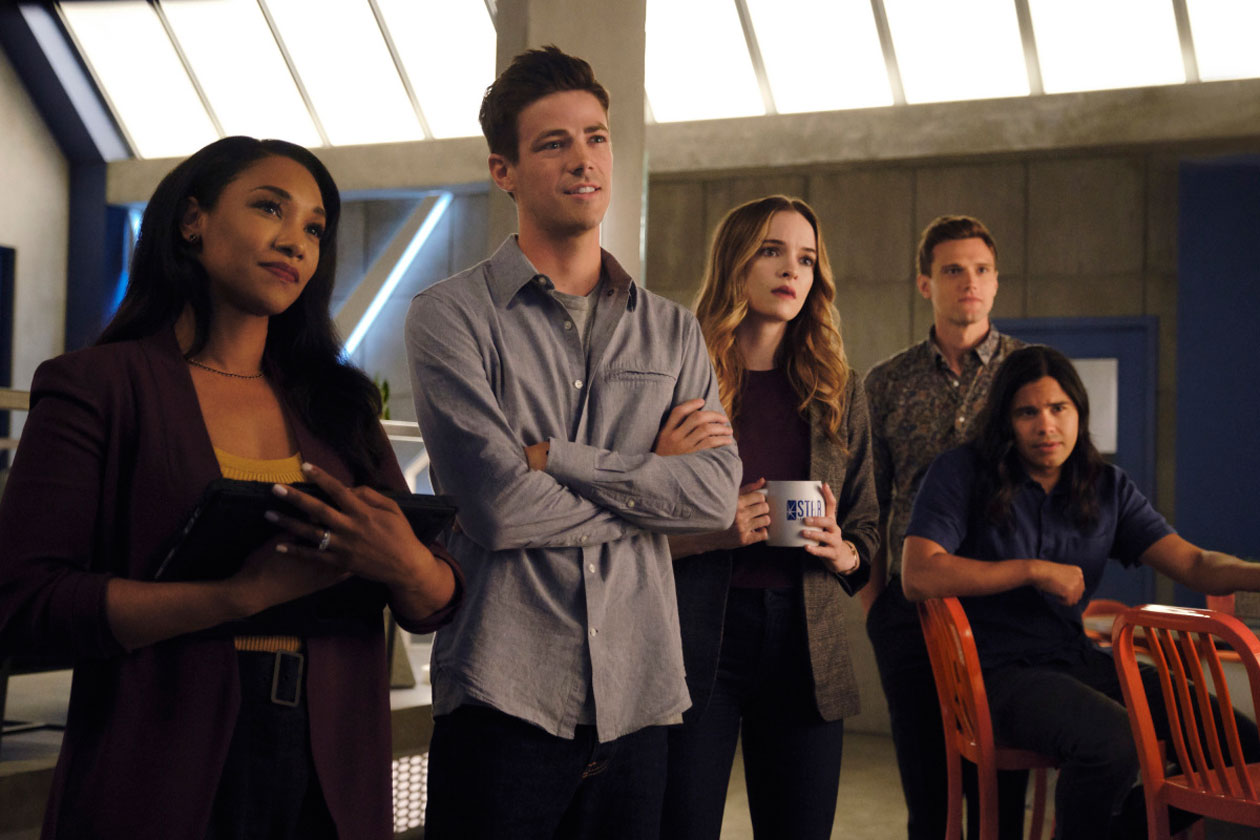 The audience knows that Crisis On Infinite Earths is coming. But only Arrow and The Flash are leaning into that. There was a lot going on in this episode. Nora's legacy loomed large, but it served a purpose. Dealing with the loss of Nora will prepare them for the day they lose someone else. While it won't be Barry Allen, because there would be no show afterward, it will be someone in his place.

The set up to the new villain, Sendhil Ramamurthy's Ramsey Rosso, was quite good. He wasn't a random person that has a run in with Team Flash, he knows Caitlin personally. It will give more severity to the season and his villainous ways. There are also a bunch of Godspeed robots/fake speedsters running around. That wasn't quite explained, but it will probably be important later.

Caitlin letting Frost have a life is quite a generous thing. Her new costume and relationship with Ralph are great. It is a new dynamic to see, letting the super be the main identity, and the regular person be the one that comes out only every now and then. The suit is definitely geared towards being heroic, instead of villainous.

Ralph's entrance was the second-most smile inducing moment of the entire episode. Hartley Sawyer is charismatic enough to be a leading man, and I'd definitely watch an Elongated Man spinoff, even if it was only 6 episodes in between Flash seasons or something like that.

The defining moment was the show being able to finally afford a Queen song, and playing "Flash" over Barry in his new suit being heroic. With the show set to be the elder statesman of The Arrowverse at the midpoint this season, it has earned the right to flex a little bit. It was hard not to smile at the cheesy moment.

Something that has become an unfortunate trend in season premieres of The Flash is the absence of the genius that is Tom Cavanagh. Cavanagh is going to do triple duty this season, with the new Wells, Thawne and another character for Crisis. So there will be a lot of him, but it is never enough. The premiere was crowded enough though, it is better that he gets the entrance he deserves.

The premiere made sure to establish that Barry is obsessed with not losing anyone again. They showed that by saving Chester P. Runk, who looks like he is going to be around for a while. As science-y as he is, it looks like this could be an eventual set up for Cisco's replacement as the tech guy, if Cisco doesn't make out of Crisis alive. It is definitely in the cards for that to happen, but that would mean Kamilla would be out of the picture too, and that is unfortunate. Runk and Cisco even have the same initials....

"Into the Void" set up the new villain, caught us up on how everyone is doing, and reminded us of the impending Crisis. It did what it needed to do, and still kept the heart and spirit of the show. Not a bad return for the Scarlet Speedster.


This week, the best episode was Black Lightning. It was the tightest hour, it had the most suspense, and the stakes felt real. It makes one wonder what this show could do on a premium cable channel or a streaming service.
Arrowverse Arrowverse 19-20 Batwoman Black Lightning Cress Williams Grant Gustin Melissa Benoist Ruby Rose Supergirl The CW The Flash TV TV Reviews