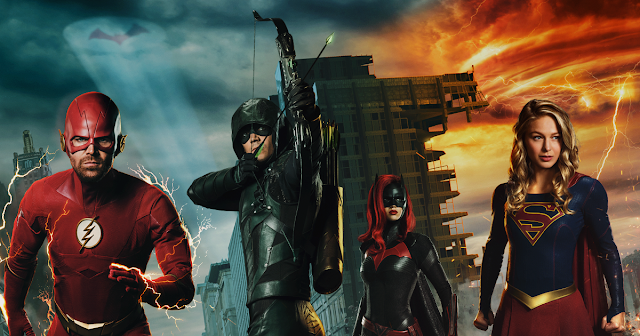 Each year the Arrowverse shows all crossover for one big event. Every year they get bigger and better. This year was no exception.

Everything else around that is secondary. The journey was more important to Oliver Queen than it was for Barry Allen. He had the most growth. After being mercilessly roasted by nearly everyone, he was the difference in the outcome of the mission. Whatever he pleaded to The Monitor (I'm sure we will find out eventually), it was because of the journey he went on. I assume he bartered his own life, but when and where will be the question.

Stephen Amell having to portray the Flash and Grant Gustin having to portray the Green Arrow made for some very fun moments. Not only did the introduction of "My name is Oliver Queen" from Grant land extremely well, but just little moments in the story like the "You have failed this city" gag.

It was also a celebration of the Arrowverse. We had former villains return, and different combinations of people interacting. For instance, it was fun to see Killer Frost and Alex Danvers share time together.

It is stunning as to what this crossover managed to accomplish in a little over 2 hours. Batwoman was so much fun to see on TV. I hope she gets her own show STAT! Ruby Rose killed it in the role, and her costume was one of the best ever seen in the Arrowverse.

There were Smallville references, and appearance from the original 90's Flash. Elseworlds was a celebration of DC Television, and they gave everyone the chance to shine.

One of the best "gets" for them though was the inclusion of Superman and Lois Lane. Elizabeth Tulloch's Lois Lane made her debut, and it was amazing how much she was Lois instantly. I can't wait to see more of her. Tyler Hoechlin's Superman returned, and every time he's on screen, you see how much he completely nails the character. His version of Superman is doing things we haven't seen in a live action Superman in over a decade. If Hoechlin and Tulloch get their own show, I will be first in line.

It is quite amazing to me that a shirtless Stephen Amell doing the salmon ladder could potentially lead to Batwoman and Superman shows. If everything that we got wasn't enough, then you need to check your priorities, but The CW also has you covered. At the very end, next year's crossover was teased with 4 words. Just 4 words:

If that isn't the biggest TV Crossover Mic Drop ever, then I don't know what is.

It is an honor to be a fan of the Arrowverse. This crossover lived up to the hype. I can't wait for the future of this universe.
Arrow Arrowverse Arrowverse 18-19 Batwoman Crossover Elizabeth Tulloch Elseworlds Grant Gustin Melissa Benoist Reviews Ruby Rose Stephen Amell Supergirl Superman The Flash TV TV Reviews Tyler Hoechlin