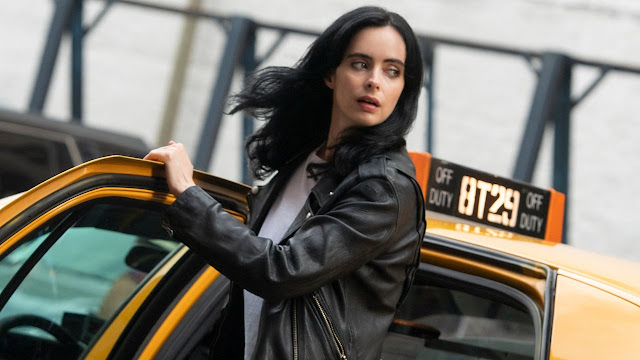 The first season Jessica Jones is some of the best television I have ever seen. I've been a fan of the character ever since, in both The Defenders and the second season of Jessica Jones. The third and final season finally aired, and while she got a complete journey, everything else in the season didn't quite land for it being the last hoorah.


Krysten Ritter is a gem, and she embodies the character so well, that it was bittersweet watching her last time as the character. She got to direct an episode this season, which was great. She has just as much talent behind the camera as she does in front of it.

This season hit the ground running, and tried to forget last season as quickly as possible. The relationship she spent all of last season developing was gone in a flash. Oscar who? J.R. Ramirez was reduced to a one-scene cameo, and so was his son. There was more to explore there, but the decision was obviously not to continue with that thread.

Two characters that have been there from the beginning got frustrating character arcs. The first one being Jeryn Hogarth. Carrie-Anne Moss does masterful work. It is the script that lets her down. The first episode or two sets up what is to be a climactic end for her, only to never get there. The last we see of the character is tragic, but the episodes leading up to that made her very unsympathetic. Because of her antagonistic journey, not getting to the climactic end is a let down. It was bad either way. If you made her sympathetic, the climactic end is heartbreaking. With the journey she went on, the end would have been somewhat satisfying. Not showing it did nobody any favors.

The other is Rachael Taylor's Trish Walker. This season was just as much her journey as Jessica's, and in a show called Jessica Jones that can be a problem. But her journey went from 0 to 60 in no time. The formula Netflix uses for these Marvel shows is stale. It makes things predictable. For Trish to be the victim of the formula used on the villain was a strange move. It made the finale more personal, but it made stakes and other moments throughout the season feel wasted. Plus, some of her motivations felt forced. She would not forgive the villain for doing the same thing to her that she herself begged Jessica for forgiveness for.

The villain, Gregory Sallinger was great. Formidable to David Tennant's Kilgrave in season 1. But he seemed like a mandate, more than a true story. The true story was about Jessica and Trish. He was just a catalyst. Jeremy Bobb did incredible work, it's just a shame the show wanted to go a different direction.

Eka Darville's Malcolm had a semi-satisfying journey. He was selling his soul, and slowly got it back. It was nice to see how far he's come since being a drug-addicted neighbor of Jessica's. He wasn't in it much, and was mostly used for other characters to get to where they needed to be in their journeys. But out of all the returning supporting characters, his was the only one that wasn't at least borderline infuriating.

I guess if the show could only get one character right, the titular one would be the one to do. So at least they got Jessica right. The character will never be destined for a happy ending, but I think they ended her story the best they could. It was more satisfying than the others at least.

The new cast, including Benjamin Walker as Erik Gelden, Sarita Choudhury as Kith Lyonne, and Bobb as the aforementioned Sallinger were all wonderful additions to the cast. They added nuance to a story that could have been devoid of it. They all got sucked into the Jessica Jones vortex, and suffered because of it.

The finale contained two cameos, one on-screen and one voice. But both are so intertwined with the character, that the season would have felt weird without either of their presence. They are part of who Jessica is, good and bad. No matter what closure she receives, they will always be a part of her. One I was expecting, the other one genuinely shocked me. It created the perfect moment, and if we never see Ritter as Jones again, she left on a satisfying note.

The story fell to the same sorry tropes the 12 other Marvel seasons on Netflix fell victim too. I don't know why the couldn't ever get away from it, but it made the show work harder than it had to. The villain shift, the "lay-low", the detour into character origin stories, all of it has been done and seen before. I'm not sure who mandated that, but it is tired and hurt the material.

Overall, the third season was fine. But it felt like diminishing returns on the series. I liked Jessica Jones season 1 better than Daredevil. It was my favorite Marvel Netflix season. This one just didn't stack up. Ritter's performance made the season worth watching. There is a lot of compelling things set up, they just didn't stick the landing. Still, if all you care about is closure of the main character, you'll get what you want.