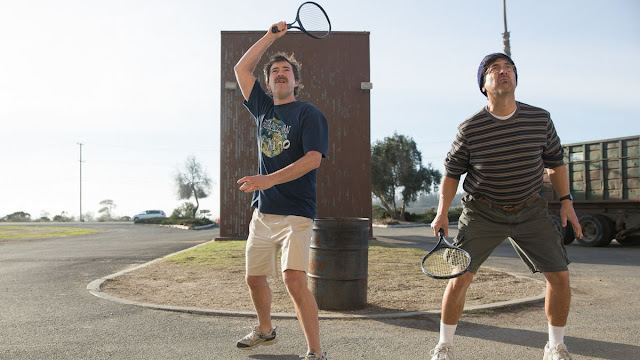 That premise provides much of the emotional depth that the film has. Paddleton really shines during the "road trip" portion of the movie. There is humor to be found, but seeing how strong the relationship between two plutonic male friends is, provides a refreshing angle not often seen. The Shawshank Redemption and Trainspotting are the only two that really come to mind. Whereas if you think of female-friend movies, there are dozens of them. That alone makes Paddleton worth seeking out.

Movies that make you think, or contemplate things, always resonate better than ones that don't. If you had incurable cancer, would you want to take your own life? On the other hand, if you had a loved one that wanted to, how would you handle it? Romano explores that latter question quite well. The comedian (who has a hilarious new stand up special on Netflix by the way) has taken a dramatic turn in recent roles, and the world is better for it. He was as great in this as he was in The Big Sick.

Andy (Romano) is not someone who wants to live in the present. He doesn't own a cellphone. He insists on using a VHS player. He likes his routine. He keeps his head down when living his life. Michael's cancer upsets that dynamic. Andy wants to pretend the means for Michael to end his life isn't there. When he can't do that, he wants to control it. At times you aren't sure which story is sadder. On the surface it seems like the guy with cancer facing death. But when you realize that death is a choice, and a kind choice at that, you begin to feel that the loved ones left behind are the ones to pity. The film lays out the touching friendship in a natural and thoughtful way.

The title of the movie, Paddleton is in reference to a game they invented. It is like paddle ball, except they try and get the ball in a barrel. It is a subtle metaphor for their lives. The wall to bounce the ball off of is huge. The barrel to get the ball in is tiny. More often than not, the ball doesn't go in the barrel, but they have fun trying to do it. Yet neither Michael, or especially Andy use that philosophy in their lives. They are so worried about the destination (barrel) of their life (ball) that they don't enjoy the journey (game).

The film might be a bit slow for some of the "explosions or GTFO" movie consumers. But Duplass and Romano give such sweet and vulnerable performances that it doesn't take long for audiences to connect to them. The film doesn't pull any punches. It is a stronger, better, and more emotional story because of it.