Jumanji: Welcome to the Jungle - Review 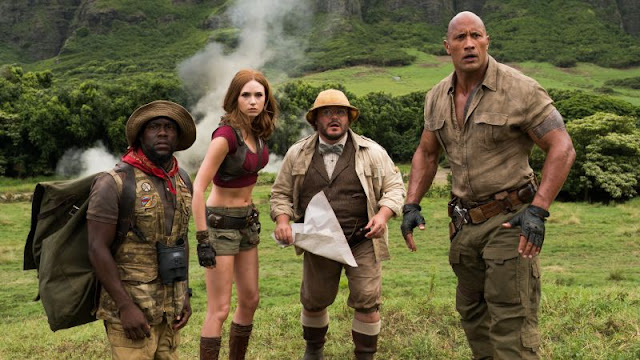 Jumanji: Welcome to the Jungle was the last film I was looking for a sequel to, but alas, here we are. It is updated to today's standards and starring The Rock, because you can't have a non-Marvel franchise without Dwayne Johnson. It's the law. Look it up. I wasn't expecting anything when I heard about it. Then the trailer dropped and that looked fun. Then I heard the reaction to it in my post-The-Last-Jedi-haze, so expected a little more. When I finally watched it, it turned out to be exactly what I expected - a fun, shallow, sterile, predictable adventure movie with a ton of heart. Continue reading below.


There were no surprises here. Every character had the exact arc you expected them too. They went through the motions, and ended up exactly where you knew they would. The reason that such a textbook adventure wasn't met with eye rolls and scoffs is because it was *fun*. The kids who bookend the film are fine. They are the stereotypical tropes. The nerd, the jock, the diva and the loner. The avatars in the game are their exact opposites, which makes them face their insecurities head on. That, however, means that the actors who portrayed the avatars got to play things a bit different than they usually do. Dwayne Johnson had to play an unsure nerd scared of everything, stuck in The Rock's body. That was fun to watch. Karen Gillan who is stunningly gorgeous, had to play the loner "plain" girl. Funny (short) man Kevin Hart had to play an all-star football jock; and in the most genius move of the film, Jack Black had to play a 16 year old blonde female diva.

Let's start there. Black's performance is a career best. He has been hit and miss, but he knocked this one right out of the park. It was actually a happy accident that I watched Jumanji on home media, because I was able to pause it to laugh at Black, and ensure I didn't miss anything else. Even if you're not usually a fan of Black, his performance here will win you over. He went all in, and not in a "Nicolas Cage in Face/Off" kind of way. This works, and elevates the film higher than it would have been otherwise.

The other three do great too, playing outside of their comfort zone made for fun performances. That, coupled with them in a "video game" setting, gave me a smile the entire first act. This was going to be a fun adventure.

But it was an adventure I'd seen before. A group of people who don't want to be together, who need to work together to accomplish a goal, end up bonding and becoming friends through it all. That description can describe about 738 different movies.

It is inevitable for Welcome to the Jungle to be compared to the first Jumanji film. Let's not get it twisted - the first Jumanji film was not perfect. But the stakes were much higher. That dice rolling down the broken house while Van Pelt held Alan Parrish at gun point was nerve wracking. The build up and the consequences were known. People could die. People could disappear for 26 years. Things could be damaged. In this? They "think" they "might" die if they run out of lives. Nobody knows. It never happened. Then at the end, a couple of the characters didn't even want to leave the game right away, as opposed to the first one, where things were so bad that Peter tried to cheat to end it quicker.

Something in this makes the first one better however, and that was Van Pelt. He is still the villain in this one (a villain with no depth, character, personality or any motivation that we care about, mind you), but he looks completely different. Bobby Cannavale plays him here, and he looks like....Bobby Cannavale. Jonathan Hyde played him in the original, but he also played Alan Parrish's father. That is when it hit me why they made that decision. Van Pelt really looks like Cannavale, but since it was Alan that summoned Van Pelt from the game, he took a similar appearance to the one person that scared Alan before he went into the game - his father. That detail was able to be assumed when watching the original of course, but it quietly reinforces that here too.

I need a perfect balance of character and plot in every story I see. Most are more one than the other. Jumanji has problems on both sides, but it so much fun in other places that it makes those errors more forgivable.

The film is fun. But it isn't life altering.

"If there's one thing the history of evolution has taught us, it's that life will not be contained. Life breaks free, it expands to new territories, and crashes through barriers painfully, maybe even dangerously, but, uh, well, there it is....Life will find a way" - Dr. Ian Malcolm, Jurassic Park (1993)

Jumanji tries to do that too. Board game first. Video game second. What's next? An app? The avatars become sentient in real life? Jumanji will find a way; and with the way this was received at the box office, I wouldn't be surprised if Jumanji found another way sooner, rather than later.
Dwayne Johnson Jack Black Jumanji: Welcome to the Jungle Karen Gillan Kevin Hart Movie Reviews Movies Reviews