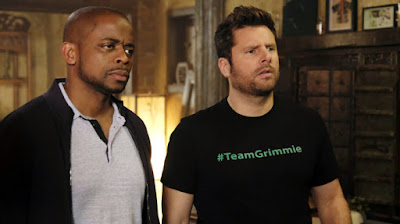 Psych is one of my favorite television shows ever. On the other hand, "Reunion TV Movies" are not. But I was very excited for this, because in this dark world we could all use a little more of Shawn and Gus's antics. That is what we got with Psych: The Movie which is a fun, flimsy journey full of fan-service. Continue reading to see more about Psych: The Movie but beware of spoilers!

Let's get the things that the production couldn't control out of the way first. The movie should have been a completely different product than what we got. Timothy Omundson was supposed to have a much bigger role, and there was supposed to be some, if not most, of the movie set in Santa Barbara which is where the TV show took place for 8 seasons. Unfortunately Timothy Omundson suffered a stroke shortly before the movie began filming. So there were some massive rewrites to write him out and keep the setting in San Francisco, which is where most of the characters ended up in the finale in 2014.

But I am not here to critique a movie that could have been. Like Justice League I am going to review the movie that was actually presented on screen. This was always branded as a movie. It has movie in the title, but it doesn't feel like one. They do seem to have had a decent budget for it, but it just felt like a long television episode. The entire thing was aimed at fans of the TV show. People who jumped into this without having seen the TV show will have been even more lost. The film doesn't make clear that he's not really psychic, or why he pretends to be. Fans of the TV show know why of course, but it would alienate new viewers.

There are a lot of inside jokes throughout the film. All of the gags that they did were pure fan service. They added nothing to the story. Don't get me wrong, as a die hard Psych fan I loved every single one: Shawn and Gus pointing at each other, the Tim Curry "no!", the exact same pineapple scene from the pilot, Gus saying "You must be out of your damn mind!", "Suck it", all of the "Gus don't be a...." lines, (there were at least 3 of them), etc. But it is all just fluff that served no purpose. This movie was a chance to add depth and a layer to the characters. It was a chance to enhance the series, not just retread it. There is a fine balance needed for a successful reunion movie. When our favorite characters return, we want them to do our favorite things, but we also need them to evolve. This tipped the scales too much on nostalgia and not enough on evolution.

I loved every single easter egg, including a thug being interrogated that was the same actor (Mark Acheson) who was the suspect in the pilot episode. (See the pictures below) I loved every joke, every line, every reference, but it did hurt the movie as a whole.

As for the story itself, it was very reliant on you knowing the history of the show. One of the most famous story arcs in the history of Psych was the Yin/Yang trilogy. It was a story told over 3 season finales, season 3, season 4 and season 5. The real villain of the movie is a product of that trilogy. Zachary Levi was a red herring, he was an over the top campy, mustache twirling villain, so it was actually a positive that he was just a decoy in the long run. But again, I feel like the villain will alienate new viewers. I enjoyed it, I always wanted to see the fate of Allison Crowley (Mena Suvari), and thought her revenge made sense, but I am so invested in these characters and this world, that any connection is a good one. If I were to guess, however, I would think that new viewers wouldn't get the motivations nor would they have the emotional connection to the villain. They would just have to latch onto Chief Vick's (Kirsten Nelson) daughter being kidnapped, and want to see that resolved.

It was nice seeing a lot of guest stars again, but a couple felt very shoehorned in. The biggest example of that was Ralph Macchio back as his Nick Conforth character from episode 5x13 "We'd Like to Thank the Academy". It was not needed whatsoever, and a waste of Macchio's talents. Now, if he was already contracted when the original Omundson-heavy script was written, and he had to be reduced to a cameo because of the last minute rewrites, then I get it and it can be forgiven. But to put him in there for one quick scene of exposition that added nothing was disappointing.

I loved the aspect of Juliet and Chief Vick's daughter Iris having a close relationship. I wonder how much of that was explored in another cut. There does seem to be another (maybe longer) cut out there because there was one part that seemed badly butchered. "The Thin White Duke" (Zachary Levi) kidnapped Iris, and when we returned to the movie from the ad break, Chief Vick and the team were meeting him at the docks as per his instructions, and they were to be taken to Iris but only Chief Vick and Juliet were to come alone....except we didn't see any of that. We just saw them show up at the docks. We didn't see them discover that Iris was kidnapped, nor did we see the Duke make his demands, or anything like that. I actually thought I missed part of the movie right around there. It was jarring, and took me a minute to catch up. I don't know why they decided to cut it, but if it was for time, it was a poor choice. They could have cut one of the dozens of the callback gags, and while I love those, that would be a better choice because it would make for a more coherent, tighter story. 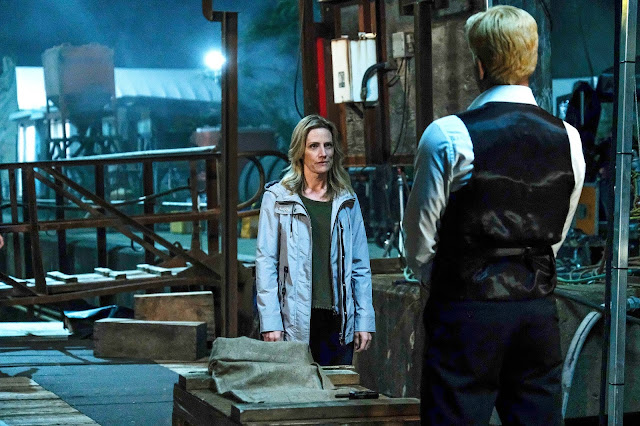 When the Lassiter cameo happened, it meant all of the main cast were now officially in the movie. It was great that he was even able to show up at all. You could tell he was still on the mend, but his voice sounded strong and if there is a sequel movie (the ending with Juliet's brother Ewan, played by John Cena, showing up certainly set one up) I hope he has a bigger role. I had forgotten that there was somebody else missing until the end when Buzz McNab (Sage Brocklebank) made a cameo helping Shawn convince someone he was a psychic. It was a random, innocuous person to the outside viewer, but nice for the die hard fans, and it was the last box to check to get absolutely every regular/semi-regular in there.

The film gave a great snapshot of where all of the characters are. Shawn (James Roday) and Juliet (Maggie Lawson) were still in a relationship but stuck in a rut, Gus (Dule Hill) finally met someone (who happened to be played by his real life fiance Jazmyn Simon), Vick was bored as Chief, and Henry (Corbin Bernsen) was having a renaissance as a hipster. Again, all great to see if you are invested in the characters already, but I do not see people caring who tried to jump on for the first time. 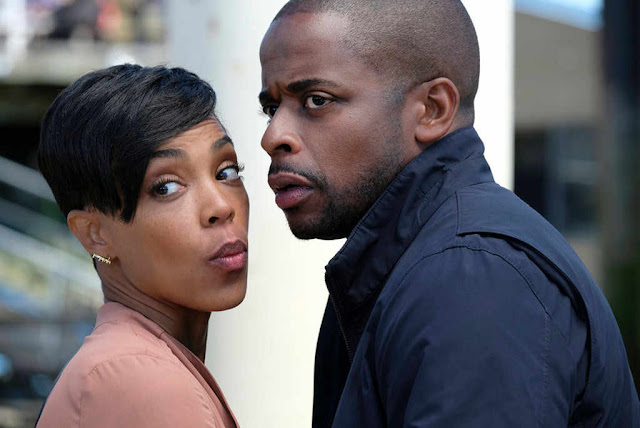 Show creator Steve Franks says he has 6 Psych movie ideas. If nothing goes wrong, I hope the next one is a stronger entry than this one. There is a lot of leeway given to this one due to Omundson's situation and people just being happy we have these lovely characters back for the first time in over three years.

I had a lot of fun watching this movie. It was like driving through a neighborhood I used to live in - I remember all of the great moments but don't take in how the neighborhood is now. I loved the movie for the nostalgia it gave me, and got to see familiar characters do things I love, but the film didn't make a statement in and of itself.

Psych will always have a piece of my heart and I am glad Psych: The Movie exists, I just wish it was a fuller and evolutionary story. There is certainly a way for the characters to never lose their charm and for the tone to be similar to the TV show, yet be able to tell a story that means something, and matters to the canon and legacy of the show. The next movie needs to EARN the "Movie" part of its title Psych: The Movie.