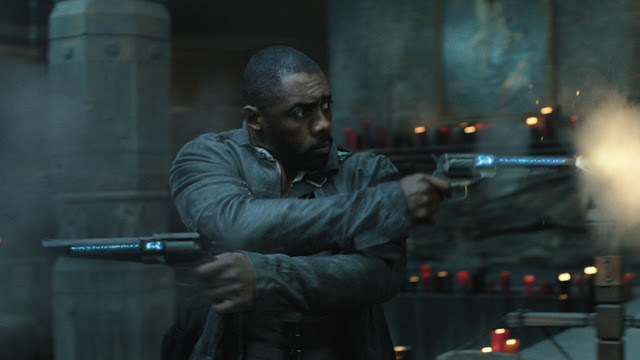 The Dark Tower has been in the lexicon of pop culture for a long time. It has been ripe for a movie adaptation for just as long. For die hard Stephen King fans, this was a very anticipated movie. People like me, who had never read the books but was just looking for an entertaining movie, were intrigued by the star power and sci-fi aspects. So how did it stack up? Read below to find out.

I went in fresh - knowing only what was in the trailers and a few general details about the series from just being immersed in pop culture so heavily. I had no expectations like I did for the Harry Potter franchise or the upcoming movie Ready Player One. (I have faith in you Mr. Spielberg!) I just wanted to be entertained. My friend on the other hand worships at the alter of Dark Tower. His holy trinity of pop culture is Star Wars, Batman and this.


We both walked out disappointed for different reasons. It is apparently not loyal to the books whatsoever, and even worse, it doesn't do well by itself either. First off, the film is only 95 minutes. In the last week or so I have praised a couple of short movies. They flowed well and perfectly fit the material. This was only 95 minutes long, maybe 88 or so if you include credits. But I felt every single minute. When I watched Wonder Woman which was my favorite movie of the first half of the year, it was nearly two and a half hours, and I was sitting there after the lights came on pining for more. When you're intoxicated by a good movie, it makes time travel possible; time doesn't matter and it seems to fly by. Same can be said, just opposite, for a movie like The Dark Tower in which I felt every single minute pass by.

The number one sin a movie can commit is if it is boring. "Bad" can be an umbrella term for many different reasons and some of those reasons can be forgiven; but boring? There is no excuse for that. There were parts of this movie where I was just plain bored. The reason for that is a mistake a lot of movies make - exposition. Every character had a ton of exposition to say. They gave a lot of information to the audience, but it wasn't the information we needed. Even if it was, movies are a visual medium, they should show us the information, not tell us. Some of the action scenes were on par with other movies today, but that didn't make up for everything else that surrounded it. I felt like I needed a notepad to keep things straight, only to realize that most of it wasn't that important and the questions I had were never answered; not mysteries meant to intrigue, but basic character stuff.


Lets take Matthew McConaughey's Man in Black for instance. I had no clue what his motivations were. None. Why did he want to end the world? Why did he get off on killing people? Why was he the "leader" with a group of followers? I got a few of those answers after the fact from my friend who read the books, but I shouldn't need that. There is a fine balance between adapting a movie for all audiences and plain old insulting them. Look at Marvel, you don't need to know anything about Ant-Man or Iron Man to enjoy those movies, even though those characters have been around for decades. The movie does the work for you, and you get everything you need to endear yourself to the characters. I didn't sympathize with any of these characters. There was no motivation. They just told me their motivation, they didn't show it. It was hard to connect with any of them. On top of all that, McConaughey, who we all know can act extremely well was very wooden in this performance. Sure, he had clunky dialogue and not a lot to work with, but someone of his talents should have made it work. I don't know what happened, but I was at least looking forward to a strong performance from him. 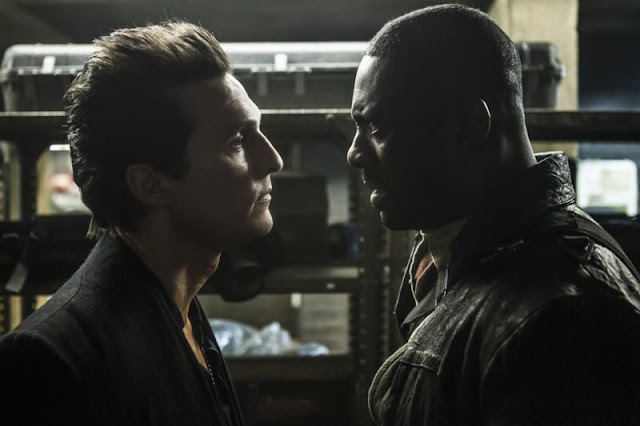 Idris Elba did give a strong performance though. He was great, and I would love to see his version of the Gunslinger in an HBO type TV series that did justice to the source material everyone seems to love so much. Like Dwayne Johnson not being able to save Baywatch, Elba couldn't save this movie. Maybe it would have worked better if he was the main character and not the kid. (The first book in The Dark Tower series is literally called The Gunslinger.) Elba deserves as much screen time as possible, and the way the movie landscape is now, audiences are smarter than these filmmakers give them credit for. You can still ground it to Earth if you think that is best, but we could have dealt with a main character from another world. Remember, audiences are fine with a sentient tree and a talking racoon. They also embraced a movie that was about dreams inside of dreams inside of dreams....they'd be able to handle something not so grounded to reality by this kid who seems insignificant in the grand scheme of things.

The director, Nikolaj Arcel did a good job directing but he did co-write the script with the man who wrote Batman & Robin. He seems like a talented director who was maybe in a bad situation (there were rumors of massive studio interference after poor test screenings, so who knows how much of the movie as presented is actually still his) and I would like to see him get another crack at a big budget property, because he moves the camera well.


None of the big moments felt earned, and the two coolest parts of the movie, the two things that might have shined some light onto it were both in the trailer. One is an action moment, the other is a joke. I don't blame marketing for that though, they had to use what they had, and they didn't have much.

Cool things about adaptations are Easter eggs. Little nods or references to things from the source material so if you had done the extra work you get rewarded. They shouldn't distract from the film itself (Stan Lee cameos in Marvel films being the exception) and people who aren't familiar with the source material shouldn't even notice it's happening yet still get full enjoyment out of the movie without them. With The Dark Tower I noticed almost every Easter egg, I just didn't know what they meant. They were obvious and sort of shoe-horned in. Many of them were tributes to other works by Stephen King (I did catch the Pennywise reference, but it didn't make sense in context) but didn't belong here at all. It actually took me out of the movie, trying to figure out what some of the stuff meant which was bad because it was work to stay with the story.

They had big plans for this, sequels, television shows, all connected together. If they stick to this path, I am not interested in any of them. There are more Stephen King properties on the way to look forward to like the upcoming Castle Rock TV series on Hulu and IT which comes out next month. But if this was supposed to make me care about more Dark Tower stuff - it didn't, and that is a shame.

Of course you should see it for yourself to judge, but movies are expensive to see on the big screen so perhaps it's better to save your money and wait until you can stream it. Besides, there are much better things playing in theaters right now that are worth your money.