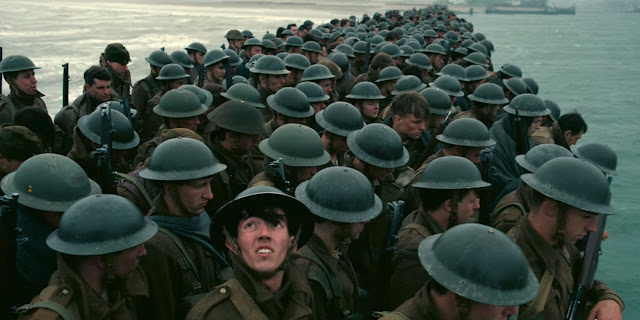 Every time Christopher Nolan makes a movie it is something of an event. They're automatically must see movies, and it is worth seeking out the biggest screen possible in which to view them. Nolan is a versatile filmmaker, doing everything from fantasy to sci-fi to superhero to history epics. Dunkirk is the latest in the genius storytelling maven's repertoire. Read on to see how it was. (Slight spoilers ahead)

I viewed Dunkirk on a 70MM IMAX projection in a Dome theater. It was one of the most visually stunning experiences I've had in my life. In fact, the first five minutes of the movie was me getting used to this presentation format. But after that it completely immersed me. In fact, if I were to half-close my eyes it literally looked like I was standing on the beach with the soldiers.

The way I saw it, coupled with how the story was presented made for a tense, visceral experience. While the film is absolutely visceral, it doesn't take away from the intelligence of the storytelling. The wibbly-wobbly non-linear storytelling technique is not only a trademark of Nolan's, but actually worked quite well in this film. We were able to see three distinct stories, blended perfectly, and merged together at exactly the right time.


As visually stunning as Dunkirk is, it is the score that really makes the film pop. Hans Zimmer composed a pitch perfect score to go on with the film. It enhances the tension and really drives home the urgency of the film. When you don't hear Zimmer's score, there is a constant ticking clock that amps the tension to almost an unbearable level. It is a cheap trick, to be sure, but definitely an affective one. The film wouldn't be as impactful without it.

There are plenty of Nolan staples in this film including Cillian Murphy, Tom Hardy and even a quick (voice only) cameo from Michael Caine. It doesn't distract from the film any though, they are all such great actors that they disappear into their characters flawlessly.

Kenneth Branagh also appears, and in the small bit he does have to do, he gets most of it done with his eyes. I haven't appreciated Branagh's eye acting enough apparently, because the way he looked at things told more of what was going on than any exposition ever could.

The young soldiers did a sufficient job. Harry Styles, while I thought would be gimmick casting, blended in fine and was not distracting.

I have seen the criticisms of the representation (or lack their of) of people of color. This isn't a soapbox post, it is a review of the film as presented in front of me, but I can see both sides. Sure, it is historically accurate, but stories always take liberties with things based off of true stories, and showing some POC play soldiers wouldn't have affected the outcome of the story one iota.

While there isn't a lot of dialogue (the score does most of the talking) Nolan doesn't waste the dialogue that is presented in the film. You feel for the characters and their struggles. You know where they are coming from. It makes you deeply invested in them so when the ending happens, you cheer! I don't know if Nolan meant for it to be interpreted this way, but the fate of the one the characters actually perfectly sets up a (more fictional) sequel in the vain of Saving Private Ryan.

Christopher Nolan is one of, if not the best filmmaker working today. Every frame of every film he makes is made with the utmost care. He has changed what an "event" movie is, and made his mark on cinema. Every film I like, I say is worthy of seeing on the big screen; and that is absolutely true. But it is especially so in this case. The presentation of the film is part of the story. Google where your nearest 70mm projector theater is, or your nearest IMAX, or better yet if you can find an IMAX theater *with* a 70mm projector and see it there. It will be the best decision you make this month. Feel free to contact me if you want to know the difference.