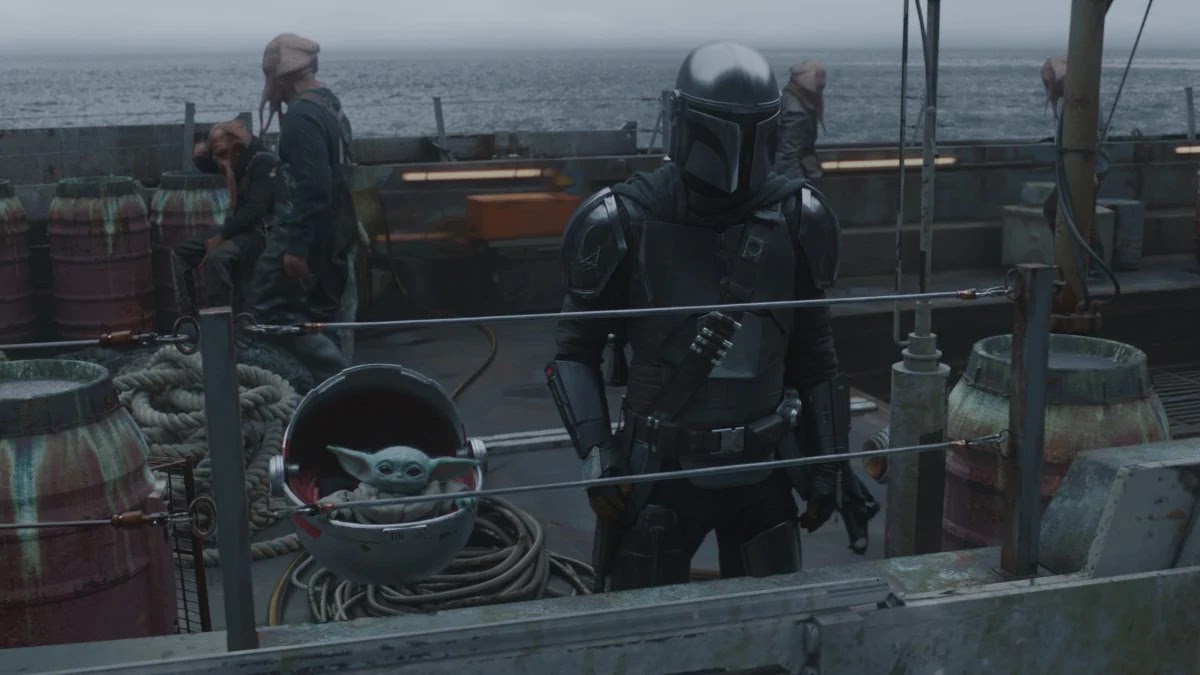 While last week's episode was fun, it didn't offer much in terms of the overall journey of the Mandalorian's quest to find The Child's kind. This week was different. It took a gigantic step in that direction. There are character spoilers throughout this review.

There were some shocking moments in this, with both The Child and Din being put in serious danger. It is a constant reminder of the harsh world they live in. It's called Star WARS for a reason. But if there is one thing that this show consistently gets right, it is the entrance of other Mandalorians. We saw it last season, when the Foundling group came to his rescue. Now in an equally impressive entrance, Bo-Katan and her group came to the rescue of him and The Child.

The episode also dealt with the different "sects" of Mandalorians, since Bo-Katan takes her helmet off quite frequently through this episode, and her appearances in The Clone Wars animated series. It was a quick conversation (with a hilariously delivered line "He's one of those") that established that they are both legitimate Mandalorians, just with slightly different beliefs, like denominations of the big religions. Then they could move on to the story. Director Bryce Dallas Howard, and writer Jon Favreau handled it perfectly.

Bo-Katan is after the darksaber, in order to return to Mandalore and rule it. This feels like it has all the makings of its own spinoff in the future. It wouldn't surprise me at all, even if it was just a six episode mini series or something like that. Like Cobb Vanth, this will not be the last time we see a live action Bo-Katan. It was also great to see Katee Sackhoff reprise her role as the character that she voiced from The Clone Wars.

The Child went through a traumatic experience, but for the first time in a while, it seems like he learned something too. We've seen the Child processing information, but the Frog people were teaching him about the eggs. He ate a few last time, but this time, it feels like he learned that this was life, and maybe even a child just like him. It was a fascinating arc especially since it wasn't even really part of the main plot.

We got a little slice of the bigger picture too, with Moff Gideon showing up again. The remnants of the Empire are still ruthless, and it was great to see Titus Welliver share the screen with Giancarlo Esposito. They certainly seem to be their own sect, trying to become the new superpower in the universe. Audiences know that he is in possession of the darksaber, so as the target of Bo-Katan, he will be seen again too. It will be interesting to see more about Moff Gideon, how he rose to power (what he was doing during the events of the original trilogy) and how he came to be in possession of the darksaber. That might never be answered in the show, but I doubt it will be left unanswered completely. It might be a book, comic, or other show, but I think it is a sure thing that we will learn more about him.

Ahsoka Tano. Arguably the most popular Star Wars character to never appear in the movies. She was brought to the attention of Din by Bo-Katan. So now, the entire focus shifts from finding more Mandalorians, to finding Ahsoka Tano. Knowing this show it will probably be a couple of episodes before we actually see her, but to think she's going to be in a live action property is insane. We haven't really seen her in this era of Star Wars before. (We saw prequel era, then slightly before OT era). There was one quick future flash at the end of Rebels but it wasn't enough to get a grasp on what she has going on now. Seeing that will be quite the treat for Clone Wars and Rebels fans.

There are a lot of pieces at play here. Boba Fett. Cobb Vanth. Bo-Katan. Ahsoka Tano. Some might just be fun cameos, others might turn into wholly important supporting characters. Some might get spinoffs. Juggling all that is a vast departure from the pretty much self-contained story in season 1. Hopefully the main heartbeat of the show doesn't get lost in all of the noise. But regardless, it should be an entertaining ride.