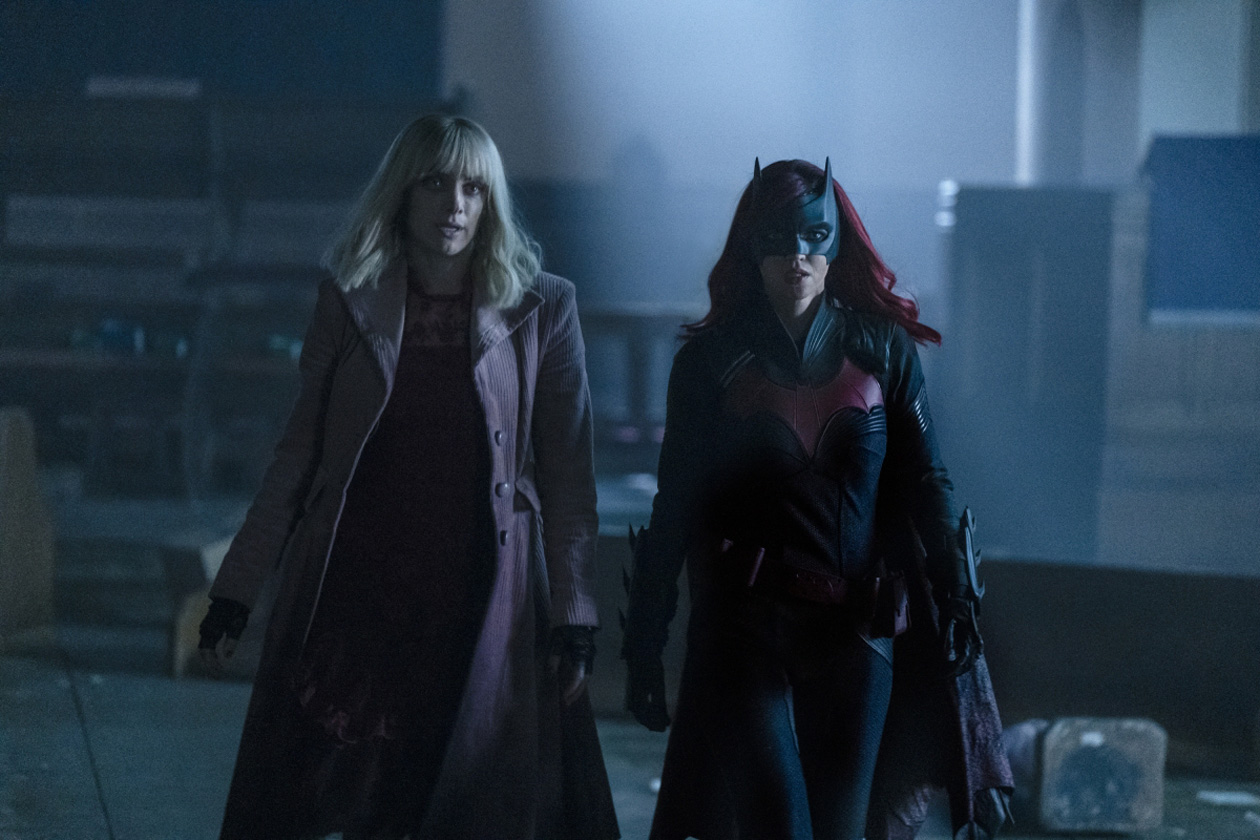 Batwoman has always been a down to Earth, street level show. So to suddenly introduce a "vampire" aspect was weird. But it worked for what they needed it to do. The biggest takeaways: Mary finally knows Kate's secret, Sophie took a stand, and twins can have opposite blood types.

Most main characters find out the identity of their superhero friend sooner rather than later. It is good that Mary knows, now things can move forward with the both of them. Arrow let Quentin Lance be in the dark way too long about Oliver's secret identity. It is good to see that Batwoman isn't making the same mistake. Mary felt like a very one dimensional character at first, but she is quickly becoming one of the most nuanced and interesting characters in the entire show.

Sophie got caught helping Batwoman instead of arresting her. Crisis put her a couple of steps behind in their relationship, but they made up the ground quickly. After her marriage fell apart - because of Kate - all she had was her job. Then she put that in jeopardy for Kate too. The kiss at the end was well deserved, and will change things from here on it.

Jacob got out of prison with no pomp or circumstance. It was just kind of like "of course he did". But he is back firmly in charge of the Crows, and trying to save their image. He believes that Beth is dead, so he can start to move forward. That is until he finds out that Beth is still alive.

The vampire/blood lust villain was very forgettable. She was just a catalyst for other characters to use to propel their own stories. Mary, Beth, Kate, and Sophie are all in different places because of her. But she was a 1 dimensional villain of the week.

Overall, a decent episode that had a lot going on. But it was the same problem that plagued this episode as the rest: execution. There are a lot of good ideas on Batwoman, but the way they come off sometimes is problematic. This episode was no exception. 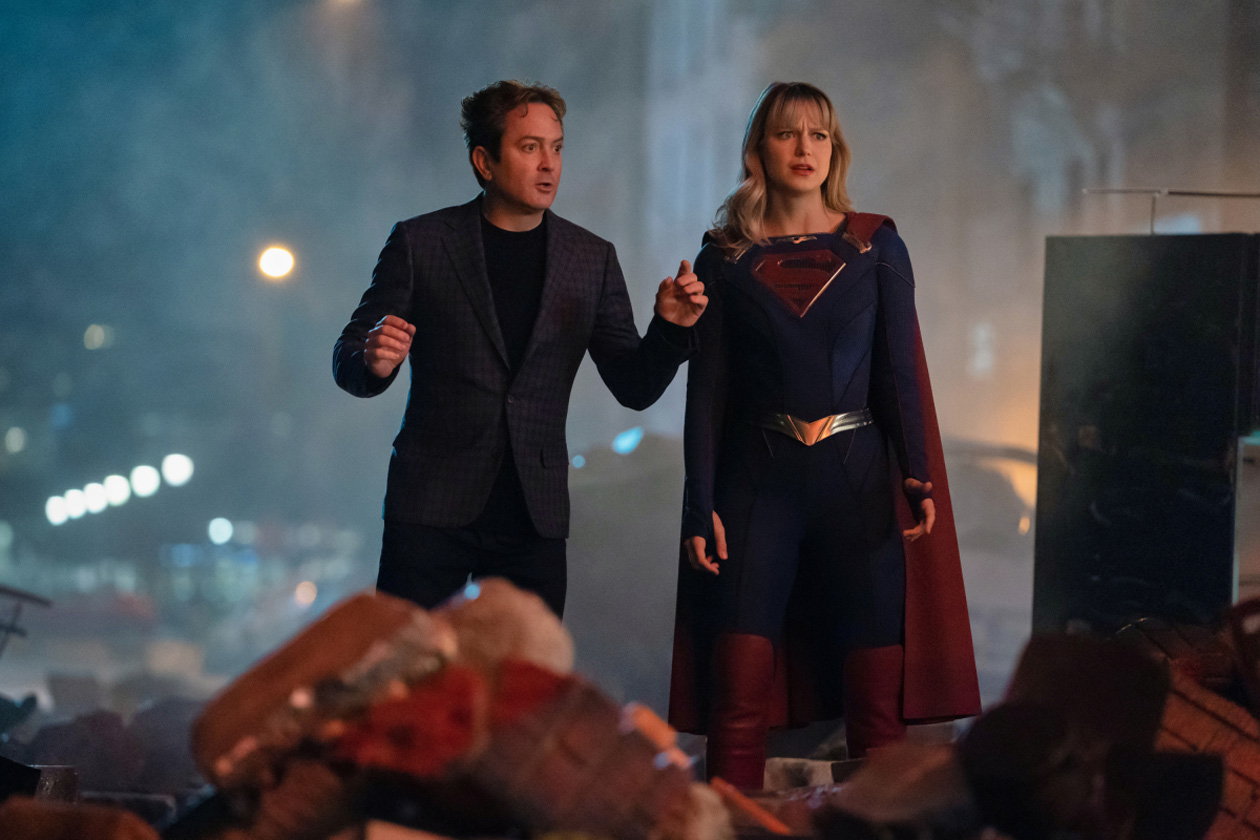 It is always fun to see what a show does for its monumental 100th episode. Supergirl was able to have something of a retrospective, using Mr. Mxyzptlk. Thomas Lennon was a fantastic version of the character, and much closer to the comic counterpart than the first time he appeared on the show played by a different actor.

The episode didn't go all the way back, but instead focused on one of Kara's biggest problems: Lying to Lena. It was fun to see some returning faces, and seeing alternate versions of scenes from previous seasons.

The lesson was taught very well: Fixing your mistakes is easier when you look toward the future and improve, than trying to change the past. Even someone who can physically change the past still had a better time moving forward.

"It's a Super Life" did have an It's a Wonderful Life" type vibe, but only dealt with one specific issue. I'm sure there are people who would have wanted a more broad scope of a story, but the more focused approach worked well.

Seeing Mon-El, Agent Liberty, and Reign all back was fun, touching on 3 distinct eras of the show. The show got to pat itself on the back a little bit, but it was well deserved. Supergirl started on a different channel and a different Earth than the rest of the Arrowverse, and now is the same channel and Earth. Out of every show, except for maybe Legends of Tomorrow, Supergirl might have gone through the biggest evolution. Seeing a glimpse into the shows past and where it came from was a nice reminder of how far its come.

It is always bad news when Mr. Mxyzptlk shows up, but Lennon was so good that hopefully he returns once again. With the Superman & Lois show happening soon, his chances just increased for that to happen.

Black Lightning - Episode 3.14 - The Book Of War: Chapter One: Homecoming 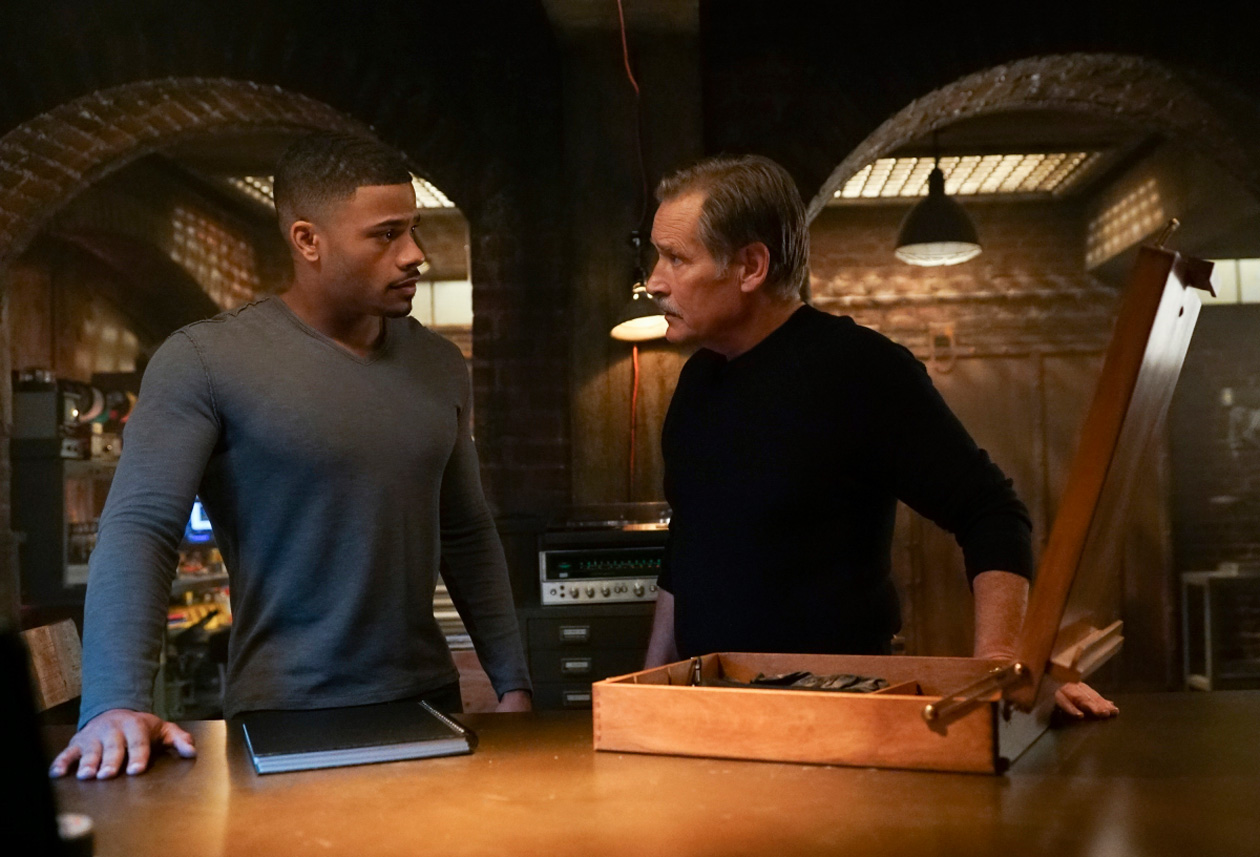 I honestly thought last week was the finale. But there were 3 episodes left after that, including this one. This was something of a reset though. Everyone was just settling back into normal life after the battle in Markovia.

A lot of character work was done with almost everybody. Lady Eve, Lala, Gambi, Brandon, Dr. Jace, Gravedigger, and all of the Pierces got huge meaningful additions to their arcs. But it was Khalil that had the most.

He almost killed Jen, which did a few things. But it also did exactly what was needed in that it separated them. Khalil is a danger to the Pierce family, and him walking away is the only thing that will help. It won't be forever, but at least he made the right decision for now.

Conspicuously absent though, was Tobias Whale. He made his escape, but was not shown his whereabouts afterward. Is he slowly rebuilding? Is he planning something? Is he going to expose Jefferson? Is he going to help the Pierces fight when the Markovians show up?

Getting Gravedigger's origin was awesome. Wayne Brady did a great job, and it was fun to see him do some stuff with a bit of drama. He is definitely being set up to be a big bad next year it seems. It would be a bit anti-climactic if he was done after this season.

Overall, the episode served to just position everyone for where they need to be for the final 2 episodes. Under that context, the episode did what it needed to do. 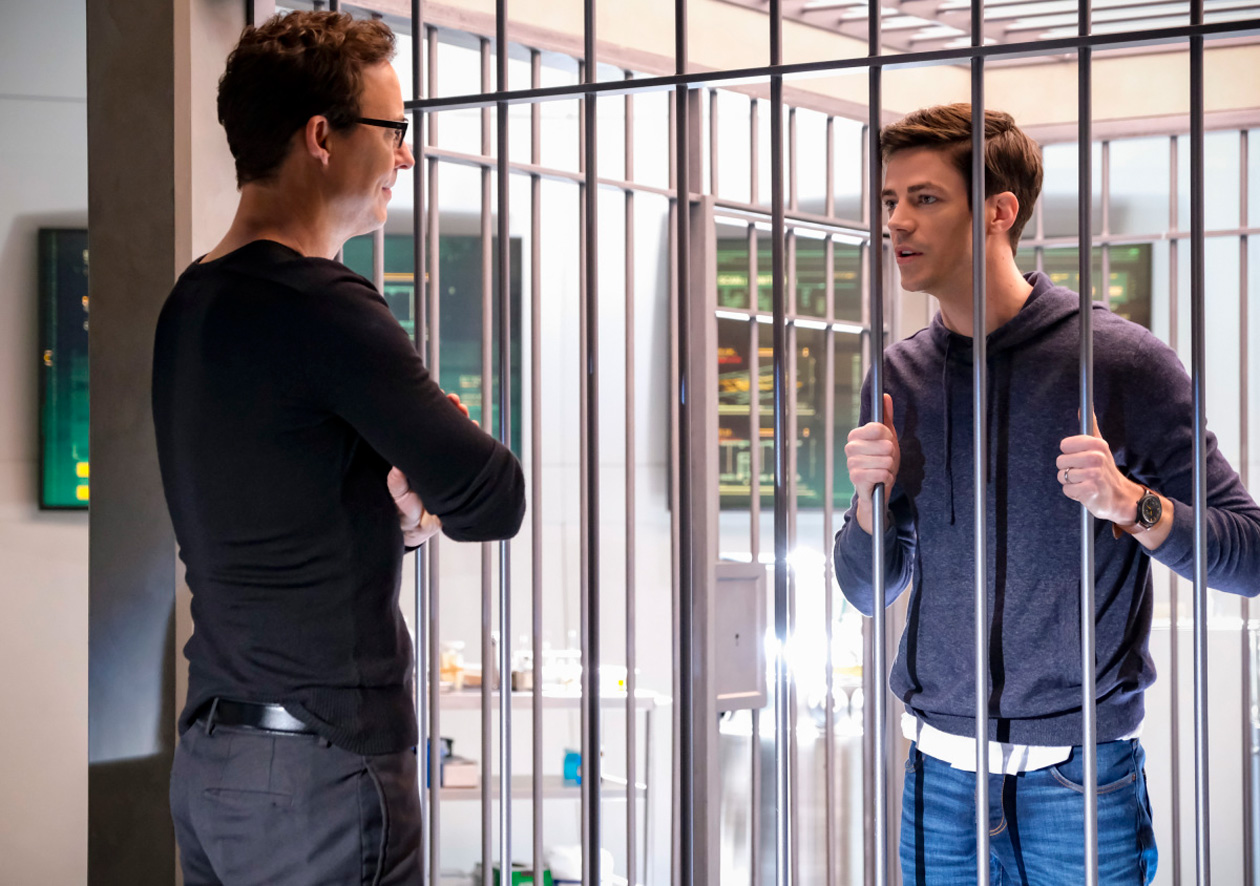 Grodd episodes on The Flash have always been a ton of fun. This one had a different feel to it though. Not only because it was with a very disjointed cast yet again, but it dealt more with the mind than anything physical.

I'm not feeling a lot of these post-Crisis Flash episodes because of all of the randomly missing cast members. To have Barry Allen be front and center was great...but to just be supported by Kamille and Chester was kind of lackluster. Sure, its a fine price to pay after Crisis. But it still felt weird. Both Kamille and Chester are fine characters, and have a place on Team Flash. But I can't remember what the last episode was where all of the regulars were in the same room or even the same episode.

The Mirror mystery is becoming a good one. Iris is a prisoner and she doesn't it. It is getting a bit long in the tooth of her being there. Hopefully that can move forward in a big bad way soon.

Allegra finding out about Nash and her doppelganger was a long time coming also. But that is the least intriguing thing about Nash right now. The fact that he is being stalked by Eobard Thawne is a much better mystery, and the one I am all on board for right now.

One of the biggest treats of the episode is seeing Grodd merge with Barry. To see a speedster gorilla was a really cool visual. The lightning bolt on his fur was a bit much, but it was all in good fun.

This episode was perfectly enjoyable, as most Grodd episodes are. But there is something to be left desired with everyone missing. Those that are in the episodes don't even share that much screen time with each other. I understand why, but it still feels disjointed. Hopefully it gets better as the season goes on. Though, none of the other shows seem to have the issue to this extent. 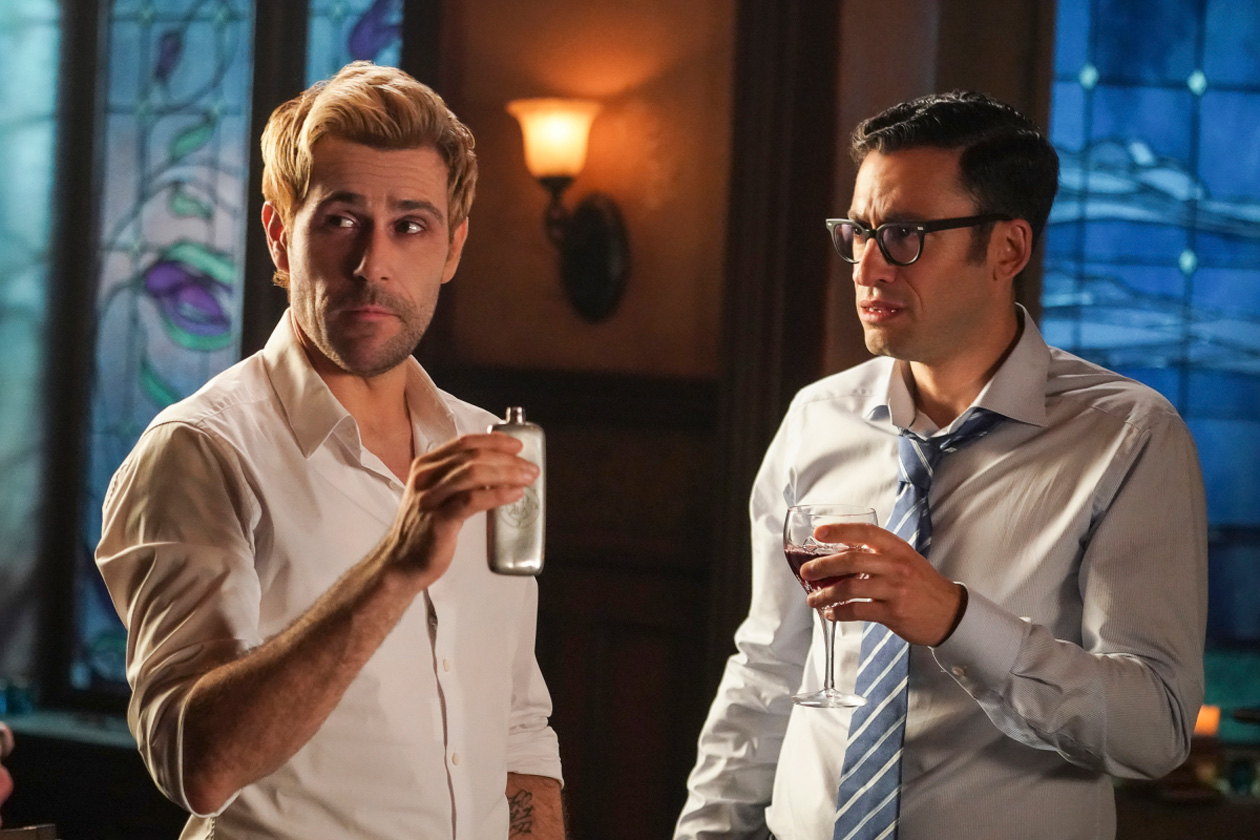 When you watch someone play a character for a long time, especially in something that is supposed to be campy and lighthearted, you can take their acting for granted. Then every so often an actor will churn out a performance that reminds you why their so great again. That was Matt Ryan as Constantine this week.

He had a lot to do, dying and all. But he gave his all to it. It was a treat to watch Ryan act. Him dealing with death, and racking his brain to find a way to get out of it was by far the best part of the episode. So much so, that the other part, stopping Genghis Khan in the 90s, felt a bit lackluster.

There were some fun moments to be had, with scooters, relationships, and whatnot. But the "mission of the week" really didn't do a lot for me when Constantine was dying. It was nice that they kind of mixed up the teams, and we were able to get a different blend of people out in the field.

Ray and Charlie essentially swapped places, and made for more interesting dynamics. Ray was able to talk some things out with Constantine concerning Nora, and Charlie was able to reveal who she really was. Charlie being this ancient being who could write peoples futures is going to send ripples through the whole show. In that, the show found its macguffin it has to hunt for in the Loom that she initially destroyed.

The absence of Sara was felt yet again, but Caity Lotz directed this episode, and it was probably easier for her to remain off camera to do so. The absence of Rory was unfortunate and wasted. His cameo was funny, but he could have been used more. Dominic Purcell was not in Crisis for that long to affect his Legends screen time all that much.

Next week it looks like the show will be back to full force, which will be a nice change.

The best episode of the week was Supergirl's 100th episode. Not only did they have their entire cast, but they brought back old cast members. It was a focused story with a ton of heart. The saw an opportunity to do something special for their 100th episode, and they did not squander it. Good stuff.
Arrowverse Arrowverse 19-20 Batwoman Black Lightning Caity Lotz Cress Williams Grant Gustin Legends of Tomorrow Melissa Benoist Reviews Ruby Rose Supergirl The CW The Flash TV TV Reviews