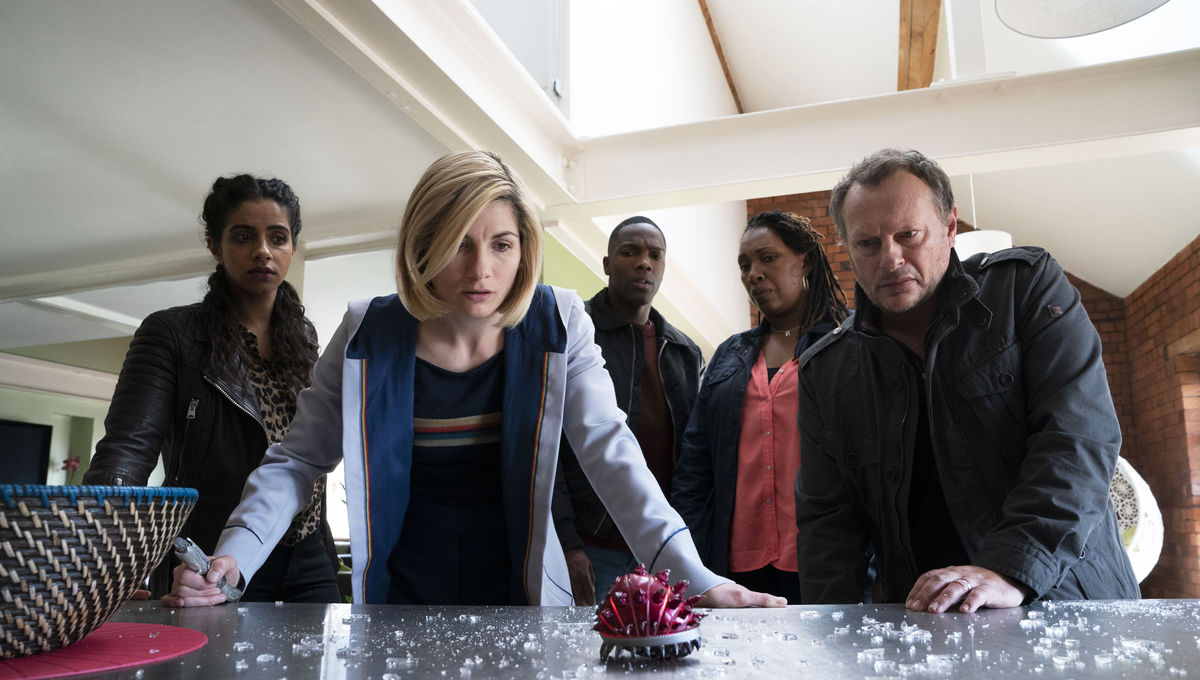 There are only a handful of Doctor Who episodes that are true game changers. Most of them are usually finales or specials. But the halfway point of season 12 is likely one of those episodes, depending on how everything shakes up. It was cool enough to see a returning alien menace in the Judoon. But for a fan favorite character to come back, and to have a reveal that shakes the fandom to its core, is spectacular. There are spoilers for the episode ahead.

The first episode of this season, "Spyfall", surprised everyone by bringing back The Master in a shocking reveal. But it turns out that Sacha Dhawan's Master was just the warm up to what showrunner Chris Chibnall had in store, which was the return of Captain Jack Harkness.

John Barrowman made his triumphant return to Doctor Who this week as Captain Jack Harkness, by trying to get a message to the Doctor. Instead, he met her companions, which led to some fun interactions. Captain Jack was used mostly for exposition, and it didn't really tie into the Judoon story at hand, at least not on the surface. As great as it was to have him back, its a shame he didn't get to interact with The Doctor. I doubt very highly this will be the last time we see him this season, but I am just happy it happened at all. For something this big to be done in secret is a big deal. Steven Moffat could barely keep anything secret. Chibnall seems to have figured out how to keep some of the big things quiet. The BBC also seem to be willing to play ball that way, and not spoil stuff in the previews and what not.

Bringing Jack back also served another purpose - having audiences not expect the other twist in the episode. Jo Martin played another version of The Doctor. But she doesn't seem to past or future version. From the clues laid out this season, it feels like it is most likely a Doctor from another universe. A parallel universe Doctor is a fascinating concept, and would be a lot less sloppy than a potential "Pre-Hartnell" secret incarnation. Besides, a "secret incarnation" has been done already, and was done quite well. To do the same gag again feels cheap.

She's a fascinating addition, and I do like Martin as the Doctor. But I am more intrigued by her story than anything else. She is different from any Doctor we've seen, and not just physically. She has a bit of an edge to her that makes her feel un-Doctor-like. There are a lot of possibilities to explain her existence, and I'm willing to give Chibnall a chance to tell the whole story before I make a full judgment. But from what I've seen, we have some big exciting revelations coming.

The episode itself was pretty straightforward on the surface. The Judoon were hired by someone to track down someone else. The Doctor interferes because the Judoon aren't allowed on Earth. It is everything done within the confines of that which made this episode special. Whittaker was great. The way she handled her companions who were asking questions at the beginning was some of her best work. She is slowly but surely making the character her own, and it is wonderful to see.

If Chibnall manages to tie in the Timeless Child, The Master, The Lone Cyberman, Captain Jack, and the mysterious Doctor all together in a neat bow, it will be quite the feat. Of course, some of these things could play into next season instead. The Timeless Child was mentioned in passing last season, and is only just now coming to fruition. So Jack and the Cybermen could be a thread for next season. Jack would also be a good tool to use if there is a change in companions. A familiar face to usher in new blood is always nice.

Its amazing that an episode this big in scope was just a mid season episode. The premiere was huge, and so was this. If that is anything to go by, the finale will be monumental. Let's just hope everyone can pull it off successfully.