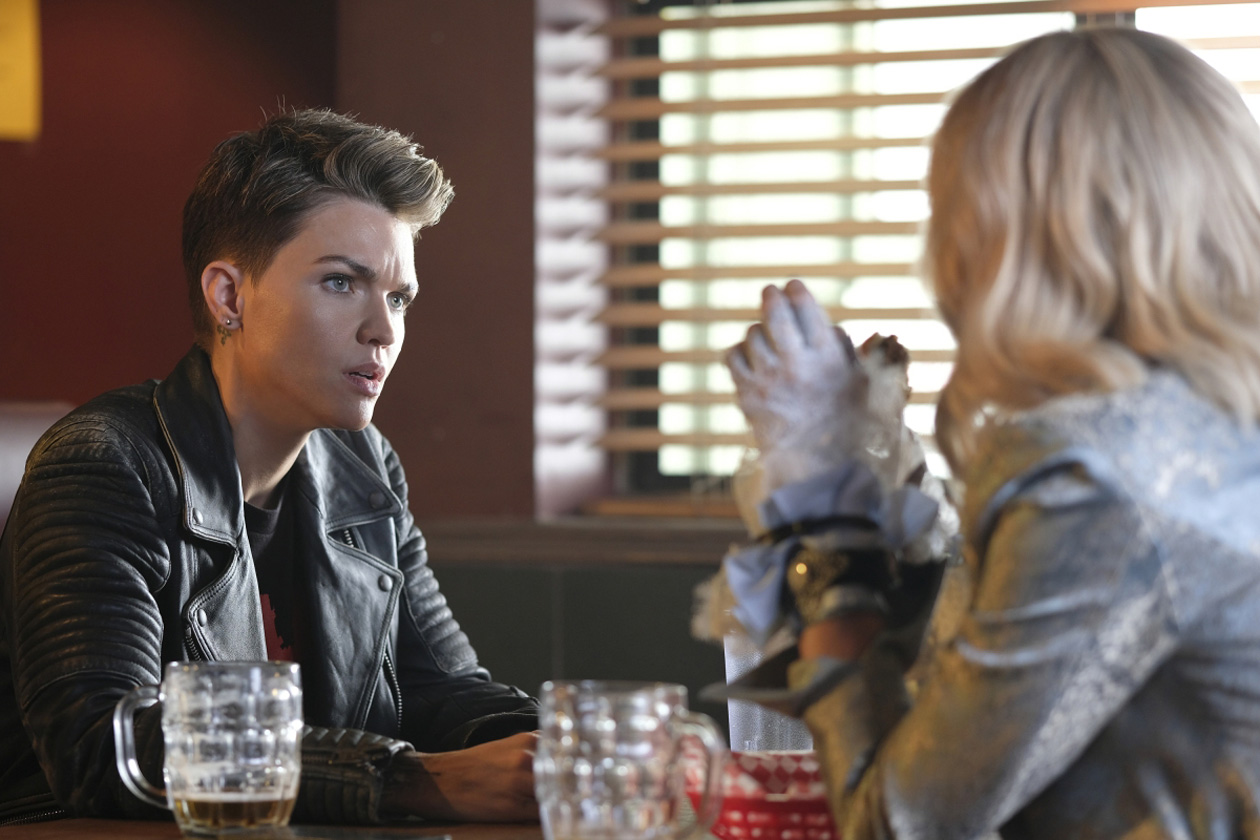 This week's episode explored what happened to Beth after the accident, and her descent into insanity. It was emotional, meaningful, and the best episode of the series yet.

One dimensional villains are the biggest problem with stories sometimes. So for a show to do work to make it so they are complex, layered, nuanced, and not too different from the protagonist is a good thing. That is what Batwoman is doing with Beth/Alice. Having her be more than just a crazy person who wants to wreak havoc makes every character interaction stronger.

This story is deeply personal for everyone involved. Catherine Hamilton has finally been revealed, and both her daughter Mary, and Jacob feel betrayed by her and rightly so.

Mary is quickly becoming one of the best characters on the show. The vapid and shallow social media fiend is becoming a layered good-hearted doctor. Her interactions with Luke showed what her priorities really are. She just wants to have a relationship with Kate, and Kate is too focused on Beth right now to notice. It will only be a matter of time before Mary is let in on Kate's secret. She is being set up to be the team medic. Wayne Enterprises funding her secret clinic would be a good first step.

The more Batwoman episodes that air, the more streamlined it can be. There is a lot of housekeeping that needs to be done, and it seems they get a little bit out of the way every week.

Redemption seems inevitable for Beth, even if it comes through one heroic act that causes her death. One way or another, Kate and Jacob will get closer. But there are several ways that can happen.

Overall, this was a very strong episode. It was a lot of character work, and hardly any "superhero shenanigans" but sometimes that is necessary.
*** 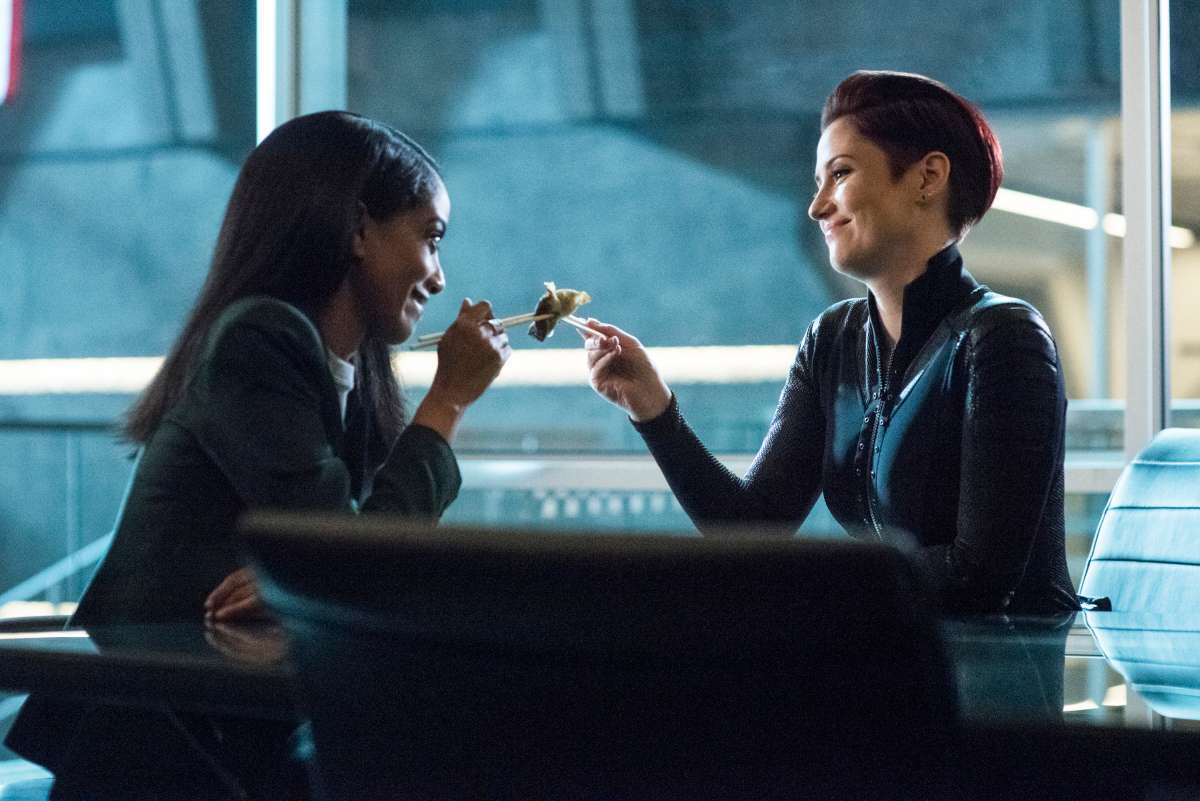 Once again, Supergirl is distancing itself more and more from the "villain of the week" formula, and is instead trying to tell one long story. Doing it that way gives deeper and richer stories.

It is always fun to see actors able to try something different. It happens every year on The Flash, when Tom Cavanagh gets to play a different character. It happened on Supergirl this time when Jesse Rath, who plays Brainy, had to be taken over by an entity to get information. Rath was able to play something completely different from Brainiac-5, and it was quite amusing.

The show did a ton of work making audiences hate William Dey, and now it is doing even more work to make the audience sympathetic to him. It is working. His story is a tragic one, and the empathetic Kara can't help but get involved. It is going to be a fun time watching his journey from antagonist to potential love interest.

It is always a pleasure to experience Phil Lamarr acting. But he does mostly voice work, so it is even more of a treat when he can do some physical acting as well. As the actor bringing Malefic to life, he is getting a lot of screen time which is a treat for anyone who likes good things. His DC ties are strong too, so it's nice that Supergirl is tapping into that.

The show has portrayed Alex's relationship before, but this one is going much better than the last one. Kelly is a much better fit, and she is an Olsen, which makes the thing even more special. Hopefully it continues to get stronger, and doesn't deteriorate, because something good needs to be a constant on the show.

Lena is going deeper and deeper, almost to the point of no return. It is unclear whether it will tie into Crisis, or if a big ol' pause button will be pressed while that happens. Either way, both things are escalating, so Kara and Team Supergirl are going to have their hands full. 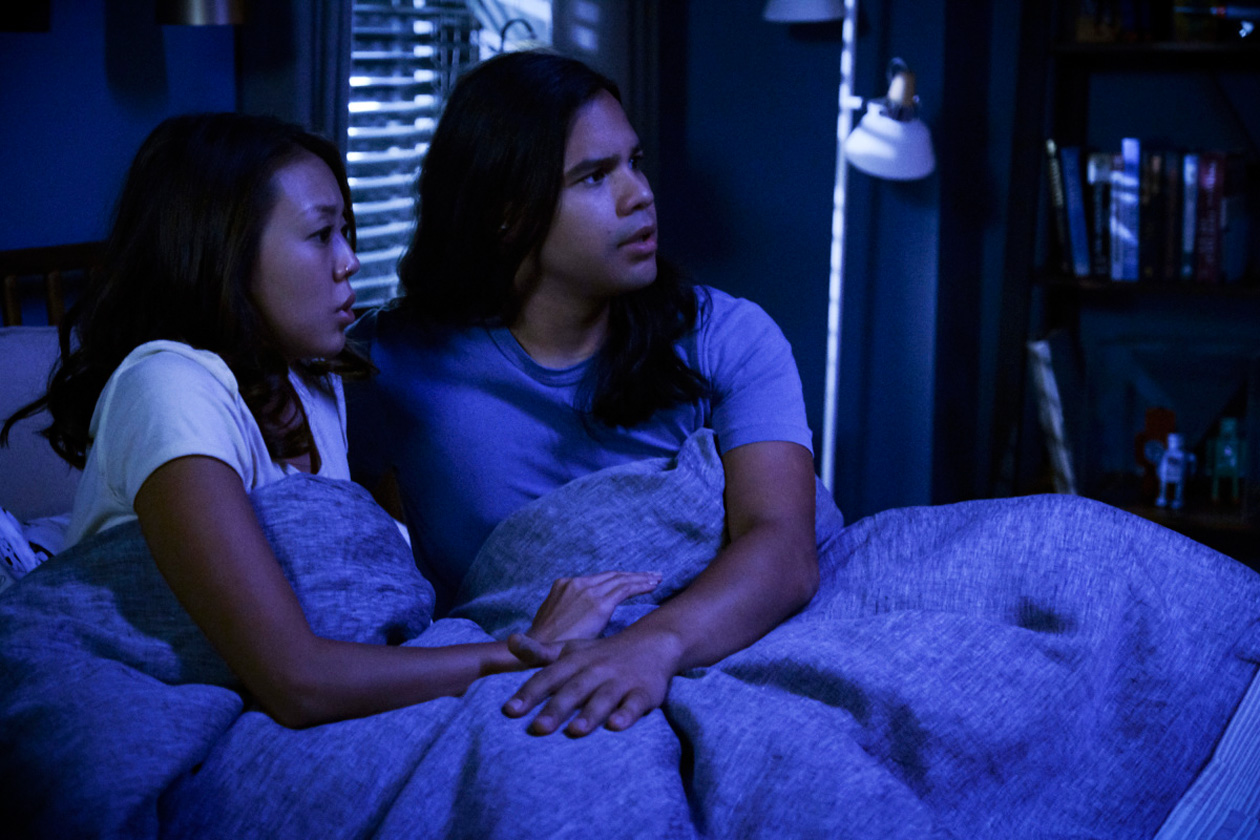 In Doctor Who, there would occasionally be an episode that didn't feature the Doctor much, in order for them to film two episodes simultaneously. With Crisis On Infinite Earths looming large, The Flash did the same thing. Barry and Iris left for a vacation, and it was the rest of the cast that anchored the episode.

There were 3 distinct stories. The main one focused on Cisco solving the murder of Gypsy. The second was Wells and Joe stuck in a sewer, and the third was Frost confronting Ramsey. That last one felt forced, as it was just a big exposition scene. It was almost if they were obligated to include him so they wrote something quickly. The other two parts were much more compelling.

The main story, with Cisco, continued his journey on him being the eventual leader. He is doing wonderful with Kamilla right now, but his past came back to haunt him. Danny Trejo is always fun to watch, and he actually had something emotional to chew on, instead of just the one-dimensional tough guy he usually plays.

The reveal that Cisco was chasing his doppelganger was a good one. The seed was planted a long time ago, so it was nice for the payoff. It is also always fun to see someone getting to flex their acting muscle. Jesse Rath got to do it on Supergirl this week, and Carlos Valdes was great doing it too.

The two best actors on the show - maybe in the entirety of the Arrowverse are Tom Cavanagh and Jesse L. Martin. For them to be in scenes exclusively with each other is a treat. The way they play off each other is spectacular. The whole episode could have been them trapped in that sewer, and it could have won Emmys. It was exactly what the new Wells needed to see the importance of Team Flash though. Joe also got to deal with the impeding loss of Barry head on, but in a relatively healthy way. Even though it was the "B-plot", it was the more intriguing and powerful story of what was presented.

Was the whole episode filler? Yeah pretty much. But it was still entertaining. Filler always happens in a 23 episode season that should be a 12 episode season. But this one had a logistical reason, so it is more forgivable than usual.
*** 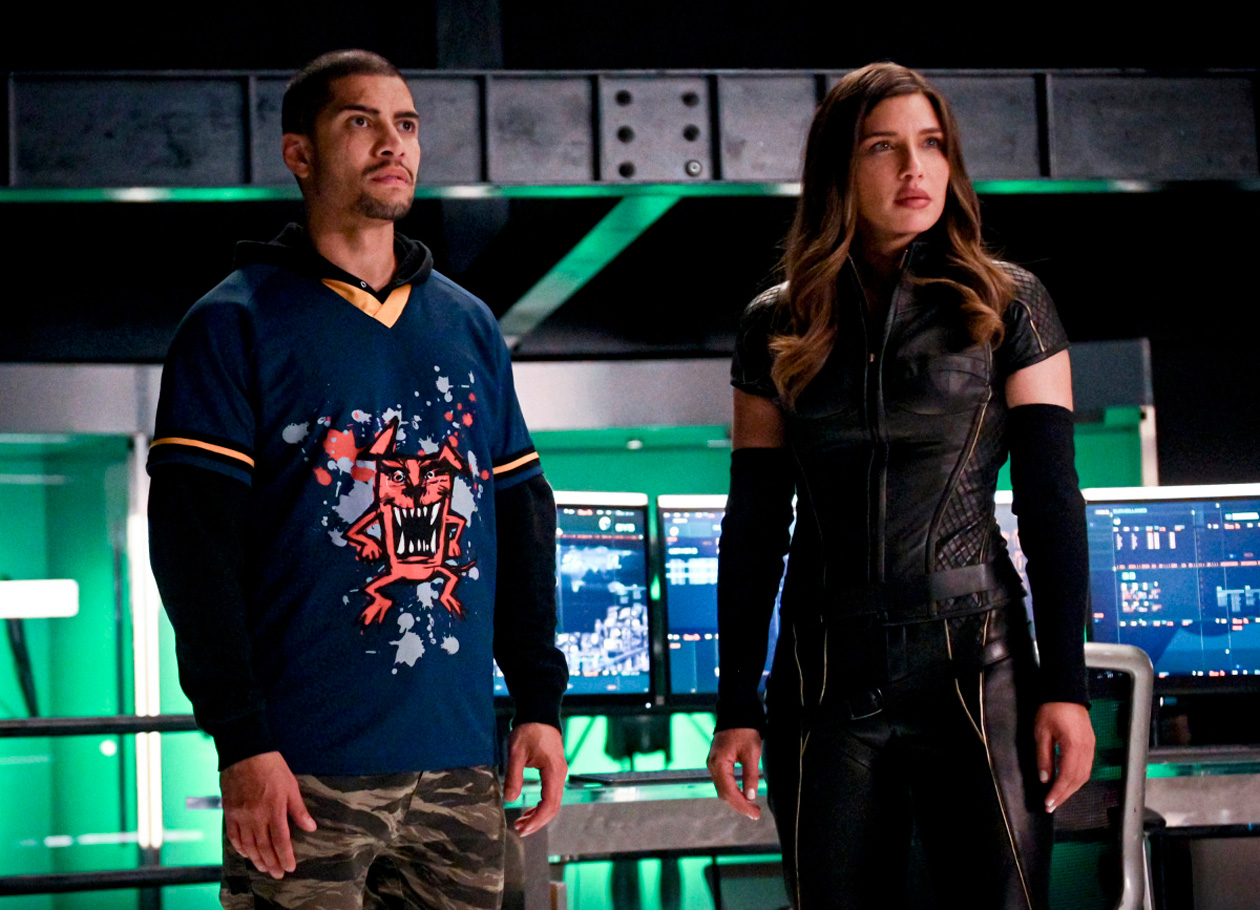 Time travel is always somewhat convoluted, but if the result is extraordinary, then it is okay. While there was no explanation or reason why Future Team Arrow would show up in 2019, the results and interactions made it worthwhile.

Adult William able to talk to Oliver was one of the most beautiful moments the show has ever been responsible for. Stephen Amell has become an increasingly better actor since 2012, and he put everything he had to use in the scene where William comes out to him. Arrow is always reliable for leather outfits, action scenes, and world saving. But they were able to provide a poignant, emotional, and powerful character interaction too. The final season is really pulling out all of the stops.

The reason why they are together will be revealed eventually. But hopefully its to give the future a happier time. It is good that they are committing to this premise for more than one episode, but hopefully it doesn't take up too much of the precious time the show has left. They did a lot of work this episode. The present cast is caught up on future stuff, like the fate of JJ and Zoe. Diggle and Connor worked through some stuff, and so did Mia and Oliver. Getting all that out of the way now, means there is something bigger to tackle in the next few episodes.

The return of Curtis is always fun to see. It was nice to see Echo Kellum back, and it sounds like he has more to do so he might stick around a bit longer. Or maybe his fate will be darker than his original exit if he is going up against The Monitor.

Laurel on the other hand, might do the opposite. She was approached to betray Oliver. Her redemption arc was a powerful part of the show. For her to do that would be taking a few steps back. But this show hasn't always done what is right for the characters. The death of Ricardo Diaz was one of the most embarrassing, disrespectful, rushed, and dumb decisions the show has ever made. They played the long game with him, then all of a sudden decided not to. It was a slap in the face to the fans who put up with it for so long. Hopefully, they will handle Laurel better. Especially if she is set to star in the Canaries spinoff. Fans need to be on her side.

It is hard not to wonder what that episode would be if Emily Bett Rickards was around. If she didn't want to exit the show, they probably wouldn't have written her out the way they did at the end of season 7. But the story beats for season 8 would have been the same. So there is a version of this story that includes Felicity in somebody's head. That could have added a whole different layer of complexity to what is already a complicated premise.

It was also nice to see Rene and Dinah having something of substance to do after hardly being in this season much at all yet. Arrow has to check every box they can now, since it won't be around much longer.

This was a very strong episode, that accomplished quite a bit. It is the most cohesive the show has ever been, and that is why it is must see TV every week.

Arrow was the strongest episode of the week. Batwoman was actually close though. They did some strong work on that show this week.
Arrow Arrowverse Arrowverse 19-20 Batwoman Grant Gustin Melissa Benoist Reviews Ruby Rose Stephen Amell Supergirl The CW The Flash TV TV Reviews