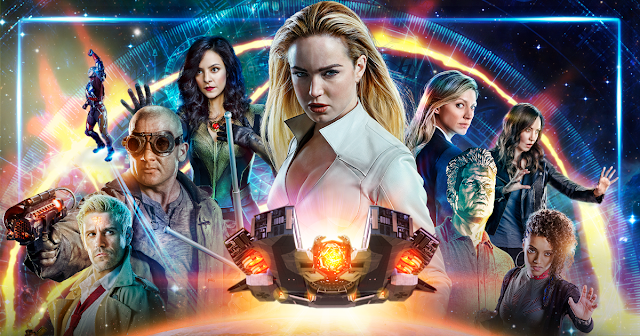 The Legends were the only ones on an adventure in the Arrowverse this week. The most ridiculous show on TV was flying solo. Next week, it will have some company. But for now, that is all you will find here.

You can read all of this season's Arrowverse reviews right here.

Legends Of Tomorrow is the most ridiculous show on television, and once they embraced that, the show got much better. However, sometimes it feels like they try to overcompensate, or try to hard to keep that title.

I see what they're doing, and for the most part it works. But egregious continuity errors and weak stories hurt the magic that they do make. There is a moment where Nate and his father Hank steal police car from a police officer. There is a single officer in the car. You see Hank take his hat and his sunglasses. The very next scene sees both Nate and Hank decked out in full police uniforms. It didn't make sense, but not in a meta-Legends way, it was just a lazy oversight. Another little thing is how they can just have fluidity of random Legends working for the Time Bureau. The Legends are fugitives, unless they put on a suit to work for the Bureau, like Zari is now. It doesn't really make sense. They put characters where they want them to be randomly, with no explanation. The show works best when all of them are together, but that hasn't happened in a very long time.

There is something about Mona I just can't put my finger on. She isn't written very well. She has her moments, but others are a hard sell and it once again takes away from the good credit that they built up.

One thing Legends Of Tomorrow has always done well is character relationships. The scenes between Nate and Hank were the strongest of the episode. The foundation being laid for Nate and Zari is working better than I expected as well.

The other thing they are doing well is the Neron story. He has injected himself into the Time Bureau, and was working with Hank. It is nice that they are tying some things together. One of the best parts of this season was the Constantine love story. For them to revisit that should be great too. With him killing Hank at the end of the episode, his presence will soon be revealed.

While the Legends kidnapped Richard Nixon, one of the best lines of the entire show was uttered: "Let's put Dick in a box." That is the sort of ridiculousness I am here for. Well done.

The show just lacks something when they put the joke over the story. It also is missing from having the entire team together. But there is still fun to be had.