Doctor Who - Episode 11.10 - The Battle Of Ranskoor Av Kolos 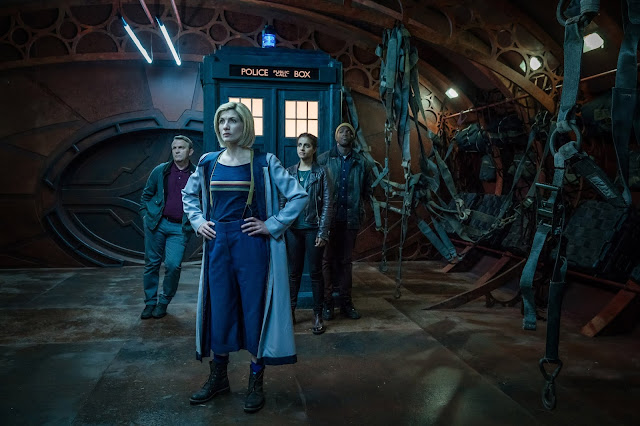 Doctor Who finales are always a spectacle to look forward to. This year, the finale was right in line with the rest of the season - for better or for worse. It didn't have a finale feel, instead it felt on the same scale as the rest of the episodes.

The only thing it had going for it that was different, was that it had a returning villain, back from the very first episode of season 11. The Doctor calls him "Tim Shaw" and this planet is where he landed after he was banished from Earth.

The episode tried to do a lot at the same time. It had a few different threads. The strangest one was Graham's desire to murder Tim Shaw - out of nowhere. If that was truly something he wanted, they should have planted the seed much earlier. Having seen the promo pics for the New Year's special already, it was known that Graham would return. Which means he doesn't kill Tim Shaw. It was sort of obvious as to what the outcome would be. I wish there was more uncertainty to it.

I was not overwhelmed by the finale. I didn't hate it either. It was just there. The cast was great, the visuals were great, and the music was as stellar as ever. It was just a few story decisions that seemed lackluster. There are many things in this finale that they could have teased through the season. The missing planets (that has been done before, but another angle could have been found), the legend of the Ux, all of it could have added a little intrigue and build up. But instead we are just told things, and are instantly expected to buy in.

Graham and Ryan are in a very good place. Yaz was still mostly forgotten. Did you know she's a police officer? It is hard to remember that sometimes. They bring up Ryan's disability, and Graham's cancer/love for Grace often. Yaz never got her fair due. I hope if this whole crew returns in s12 (right now, just Jodie is confirmed), that Yaz gets a big hearty story.

I love Jodie Whittaker as the Doctor, but she doesn't have a dark edge like the previous ones. She can do joy and wonder as well as the best of them. But it was difficult to see the darkness come out when she was telling Graham to go back to the TARDIS. Whittaker is a great actor, so maybe it was the direction, but that scene just felt off.

The episode ended rather abruptly too. There was no time after the climax to let anyone breathe. The new regime trims the fat so severely, that some of the charm goes away. You could probably count the interior TARDIS scenes on one hand. The time vortex connectors even less so.

Mark Addy was a wonderful guest star, and I would love to see him return in a future story. He rescued his crew and left the planet, so it's possible we can see him again. That would be nice. The 13th Doctor is starting to accrue new friends, and it is always fun when we can see them pop up again in some form.

This season had a didn't have a lot of highs or lows. It towed the middle ground quite a lot. The highs were exceptionally high though ("Rosa"), and the lows are easily fixable. I've said it once, and I will say it again: Being a Doctor Who fan is an honor, and I can't wait to see what's in store next.