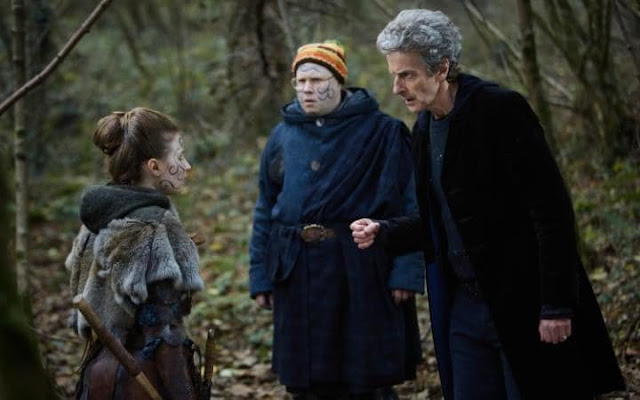 This week marked the first time a writer from the Classic Series returned to write an episode. Rona Munro went 28 years between episodes. So continue reading below to find out how her return went.

The formula of this episode was sort of flipped on its head in one sense. The normal thing has been for Nardole to either be with both The Doctor and Bill, or separated from them completely. Munro flipped that and kept Nardole with the Doctor and separated Bill from them. They were apart for most of the episode but that recipe seemed to work.

It was a fun dynamic because Nardole is now a fully-fledged character and very fun to watch. So for him to play off the Doctor and not have to yell at him, or provide exposition for Bill, really let him shine.

The plot was pretty simple, but it seemed to work. The monster of the week did work better when it was in the shadows and not seen completely. Some of the mystique disappeared when it was fully unveiled.

The guest cast was great too. Brian Vernel was the head Roman (But Rory will always be the number one Roman in our hearts) and if he looked familiar its because he appeared in The Force Awakens as Bala-Tik from the Guavian Death Gang.

I absolutely love the metaphor that light will defeat darkness. People from different walks of life who were originally against each other came together to defeat darkness by magnifying the light. That is a message that a lot of people in the world need to hear right now. Munro was cognizant of that and it is something that hasn't changed much from 28 years ago when Munro wrote for Doctor Who.

This was the very last "regular" or "standalone" episode Capaldi will ever have. All that is left with him is a two part finale and the Christmas episode where he will regenerate. Even if he returns after that in a multi-Doctor special in the future, it will be a special occasion so this is truly the last regular episode he will ever have. He is a great ambassador to the show and a wonderful Doctor. But I won't dwell on that now. That will be another post for another time.

The end scene that set up the finale was intriguing. Missy was out of the vault doing some maintenance on the TARDIS for the Doctor. She seems to have genuinely changed, and seems to be empathetic to a lot of what is going on. To the point where The Doctor even contemplated "being friends" again. Now, I say "seems" because The Master is a brilliant con-person. Missy's past self was able brainwash everyone into making him Prime Minister. The character is insane and seems to be inherently evil because it is fun for her. She raised an army of Cybermen from the bodies of dead humans for fun. She killed Osgood and a random family for fun. She gets off on it. So it is hard to believe she genuinely changed, but they are doing a good job convincing us otherwise. A lot of times they let the audience in on the secret before the main characters find out. If there is something that is up (which I am almost positive there is) they aren't letting us in on it, which means we will find out when The Doctor, Nardole and Bill do. But it was a great scene and you got to see Michelle Gomez's acting range which was quite good.

Next week we start the beginning of the end. We get the beginning of Moffat's last three episodes probably ever. The title "World Enough and Time" seems to be a reference to the poem "To His Coy Mistress". I will embed it below if you want to try to glean clues from it.


Had we but world enough, and time,
This coyness, Lady, were no crime
We would sit down and think which way
To walk and pass our long love's day.
Thou by the Indian Ganges' side
Shouldst rubies find: I by the tide
Of Humber would complain. I would
Love you ten years before the Flood,
And you should, if you please, refuse
Till the conversion of the Jews.
My vegetable love should grow
Vaster than empires, and more slow;
A hundred years should go to praise
Thine eyes and on thy forehead gaze;
Two hundred to adore each breast,
But thirty thousand to the rest;
An age at least to every part,
And the last age should show your heart.
For, Lady, you deserve this state,
Nor would I love at lower rate.

But at my back I always hear
Time's wingèd chariot hurrying near;
And yonder all before us lie
Deserts of vast eternity.
Thy beauty shall no more be found,
Nor, in thy marble vault, shall sound
My echoing song; then worms shall try
That long preserved virginity,
And your quaint honour turn to dust,
And into ashes all my lust:
The grave's a fine and private place,
But none, I think, do there embrace.

Now therefore, while the youthful hue
Sits on thy skin like morning dew,
And while thy willing soul transpires
At every pore with instant fires,
Now let us sport us while we may,
And now, like amorous birds of prey,
Rather at once our time devour
Than languish in his slow-chapped power.
Let us roll all our strength and all
Our sweetness up into one ball,
And tear our pleasures with rough strife
Through the iron gates of life:
Thus, though we cannot make our sun
Stand still, yet we will make him run.

It has been a fun ride and I am ready for what comes next. "World Enough and Time" airs Saturday, June 24th at 9/8C on BBC America.
Doctor Who Matt Lucas Michelle Gomez Pearl Mackie Peter Capaldi Reviews Rona Munro TV TV Reviews